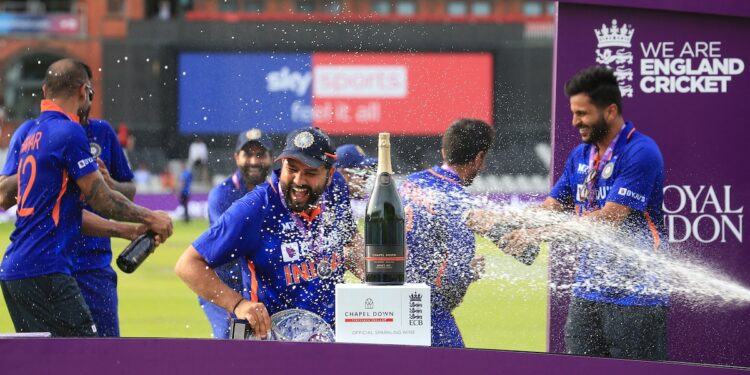 Indian team members celebrate after the win over England.© AFP

Team India defeated England by five wickets in the third on Sunday and decided ODI to take the series 2-1. When chasing a 260-run goal against England in the match at Old Trafford in Manchester, India were 72 for 4 at one point, but a 133-run partnership between Hardik Pandya and Rishabh Pant turned the match upside down. While Hardik was sacked after playing a 71-run 55-ball knock-off, Pant didn’t stay out until the end to take India home with his 125 from 113 balls.

Later, India’s Board of Control for Cricket shared a video on social media showing the Indian team’s players celebrating their ODI series win over England. “Reactions and emotions in the dressing room after #TeamIndia’s ODI series triumphed against England in Manchester,” BCCI captioned the post.

It is worth noting that India had started the series with a 10 wicket win over England but the hosts came back with a 100 run win to take the series to the decider.

In the third ODI, Rohit Sharma won the toss and chose to bowl first. Indian bowlers bundled England for 259 runs, with Jos Buttler being the top run-scorer for England, courtesy of his 60-run knockout. Meanwhile, Hardik Pandya recorded his best ODI bowling figures of 4/24 and Yuzvendra Chahal returned 3/60.

In response, India’s top order didn’t get the team off to a good start, as the trio of Rohit Sharma, Shikhar Dhawan and Virat Kohli added just 35 runs. However, an undefeated century of Pant and Pandya’s fifty came to the rescue of India and it eventually helped the guests grab the ODI series.