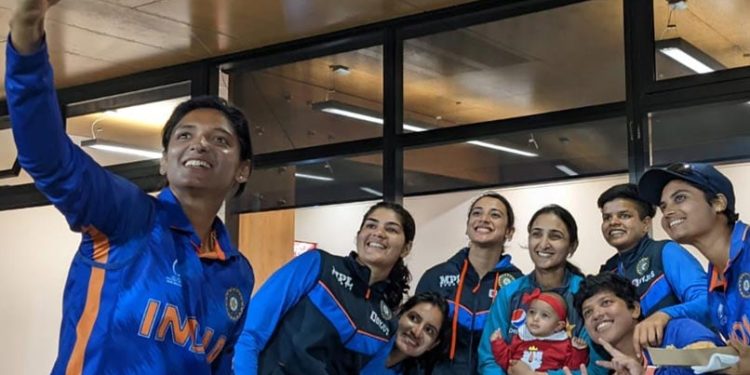 India defeated Pakistan by 107 runs to kick off their 2022 ICC Women’s World Cup campaign on a winning note at Mount Maunganui on Sunday. Shortly after India’s victory, the team’s players shared a heartwarming moment with Pakistani captain Bismah Maroof and her infant daughter. In a photo shared by a Pakistani journalist on social media, the Indian players can be seen posing for a photo with Maroof and her daughter. The Indian players also make playful gestures towards the toddler. Many social media users praised the players for the gesture.

Earlier on Sunday, the Indian team defeated arch-rival Pakistan by 107 runs to kick off their campaign in the tournament on a rousing note, with the much-anticipated face-off ending in a no-contest.

In-form opener Smriti Mandhana, Sneh Rana and Pooja Vastrakar chose to bat after the coin landed in India’s favour, striking useful half-centuries to help their team recover from an early wobble and post 244 for seven in the Bay Oval.

The Pakistani team hunted for a tricky target of 245, but fell way short, going all out for 137 in 43 overs, losing its 11th consecutive game against neighboring India in the 50-over format.

Left-arm spinner Rajeshwari Gayakwad made the star turn with the ball and returned with excellent marks of 4/31 after her full quota of 10 overs.

Seasoned pacer Jhulan Goswami threw very well to end the game with impressive figures of 2/29, while there were also two wickets for Rana (2/27), finishing off her fine all-round show.