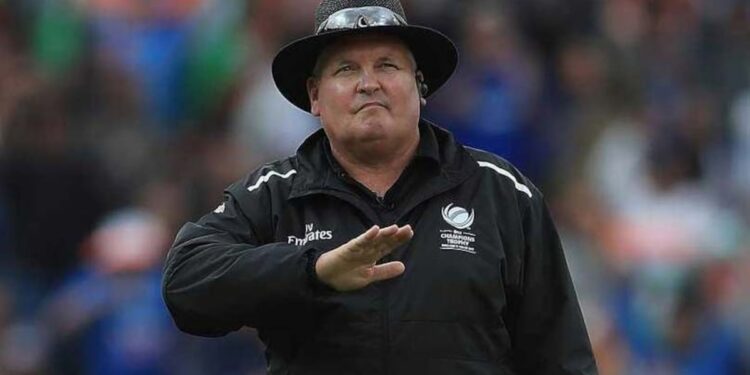 Marais Erasmus will become only the third South African umpire to be in 100 ODIs when he leads the first match between the Proteas and a visit to India on Wednesday. Widely regarded as one of the best umpires in the world, 57-year-old Erasmus will join the duo of Rudi Koertzen and David Orchard when he disembarks here at Boland Park for his landmark assignment. Koertzen held the world record of 209 ODIs – a record between 1992 and 2010 – until he was recently overtaken by Pakistani Aleem Dar (211), who is still active, while Orchard refereed 107 matches between 1994 and 2003.

“I’m very proud to have survived long enough to reach this milestone. It’s a tough environment to survive because we’re under scrutiny all the time, so it fills me with pride that I got through that period,” Erasmus said as follows. say on the Cricket South Africa website.

“We are all servants of the game, but sometimes when a milestone is reached we are recognized, which is a lot of fun.” Erasmus said reaching 100 ODIs was never something he thought about when his journey first started in Nairobi on October 18, 2007 – in a match between Kenya and Canada.

“When you start, you never look that far ahead. It’s clearly something new and you try to enjoy those moments, that’s what I did.

“But as you go through to the third, fourth and fifth years, of course you think of reaching 50 or whatever milestone is closest to it. So getting to 100 is fantastic, but it’s not part of asking goals. You just want to be there and do the best you can.” Erasmus, who will become the 18th referee in the world to appear in 100 ODIs, said he and his family have sacrificed a lot to get to where he is today. He said his wife Adele gave up her job to care for their twin boys.

“And now in Covid times where I’m in a bubble for six weeks, she’s only on Christmas so it’s been difficult at times. But referees have given us so many opportunities. We’ve traveled all over the world as a family, so there are been more good than bad.” He said it’s nice to hear good things about his referee, but at the same time “there is a certain level of expectation”, which puts him under a bit more pressure “because we are all proud of our achievements”.

“We don’t want to be talked about and normally it’s because we made a mistake. I’m just really happy that things went the way they did.” So, does Erasmus have a preference when it comes to referees? Like players, he admits that Test cricket is the most grueling and can be tough on the officials too.

“Umpiring Test matches are definitely more challenging because of the length of games and the kind of pressure that comes with them. So it’s a lot more taxing, but that’s not to say ODIs and T20Is aren’t.

“They all come with different challenges, the different formats, but I’ve enjoyed everything about international cricket so far. I’m really motivated to keep going…I’d still like to do two or three years.”