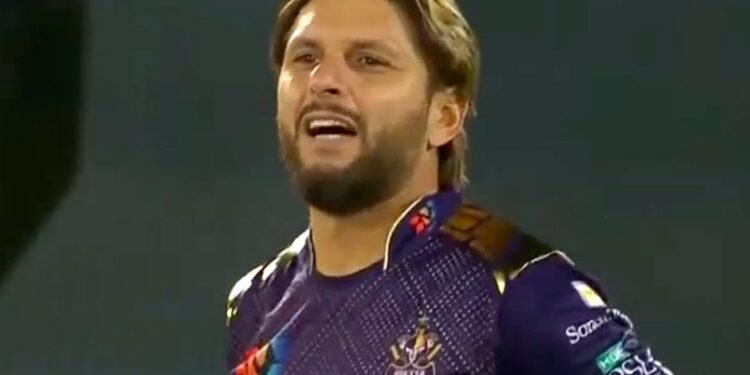 PSL: Shahid Afridi was hit for 67 runs in his four overs.© Twitter

Quetta Gladiators veteran all-rounder Shahid Afridi returned to the Pakistan Super League (PSL) claiming one wicket in a match against Islamabad United in Karachi on Thursday. Afridi was hammered for 67 runs in his four overs, taking just a single wicket. The former Pakistan captain threw some questionable lines and lengths and was most notably targeted by the attacking batter Azam Khan. Afridi was hit for 47 runs in the first three overs of his spell while being crushed for 20 in the last over of the innings by Azam.

Despite going over for three sixes in his last, Afridi got revenge when he bagged Azam with a faster delivery. Afridi didn’t seem to enjoy the wicket with a quick walk back to the start of his run to bowl the next ball.

Afridi roared back to claim Azam’s wicket, here’s the video:

Islamabad batted first and scored 229 for four wickets in 20 overs with 1950s Paul Stirling, Colin Munro and Azam. Mohammad Nawaz was the most successful bowler with figures of 2/32 in four overs.

In response, Quetta could only collect 186 runs as they came up 43 runs short. Ahsan Ali scored fifty and Nawaz hit brilliantly to score 47 points, but that turned out not to be enough.

Afridi also disappointed with the bat, scoring just four points on eight pitches before being sacked by Shadab Khan.