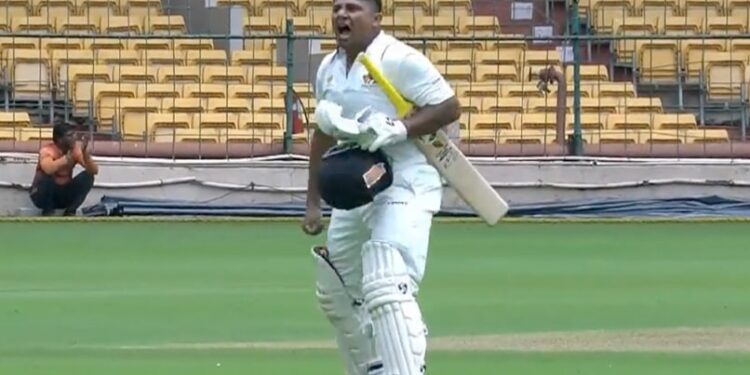 Mumbai batter Sarfaraz Khan was crowned ‘Man of the Tournament’ for his brilliant 2022 Ranji Trophy with the bat, scoring 982 runs. Madhya Pradesh made history, winning their first Ranji Trophy title on Sunday by beating favorites Mumbai by six wickets in the final at M. Chinnaswamy Stadium in Bengaluru. In six games, Sarfaraz scored 982 runs at an average of 122.75 and finished at the top of the charts. Four centuries and two half centuries were scored by the batter in the season, with the best individual score of 275.

In second place was his distant rival, Rajat Patidar of Madhya Pradesh, who scored 658 runs in six matches at an average of 82.25. Two centuries and five half centuries came from his bat, with the individual best score of 142.

Other top hitters from the 2022 edition of the prestigious tournament include Chetan Dinesh Bisht of Nagaland (623 runs), Yash Dubey of MP (614 runs) and Shubham Sharma (608 runs).

Shams Mulani of Mumbai dominated the bowling cards, finishing as the best bowler with 45 wickets in six matches with an average of 16.75 and economy of 2.90. His best bowling figures in the tournament are 7/114.

In second place is MP spinner Kumar Kartikeya, who took 32 wickets in six matches with an average of 21.00 and an economy rate of 2.27. His best bowling figures in the tournament are 6/50.

MP did lose some wickets in their chase of 108 but won the match by six wickets with Patidar (30*) and skipper Shrivastava (1*) taking the team home.

Previously batting first, Mumbai placed 374/10 on the board. Sarfaraz Khan (134), Yashasvi Jaiswal (78) and Prithvi Shaw (47) played crucial knocks for Mumbai. Pacer Gaurav Yadav was the star for MP with the ball taking 4/106 while his pace partner Anubhav Agarwal took 3/81.

In the second innings of the game, Madhya Pradesh was absolutely dominant with the bat, racking up a massive 536/10 and taking a 162 point lead. Yash Dubey (133), Shubham Sharma (116) and Rajat Patidar (122) were the most important stars for MP with their centuries.

Shams Mulani was the main bowler for Mumbai, with 5/173, while medium pacer Tushar Deshpande won 3/116.