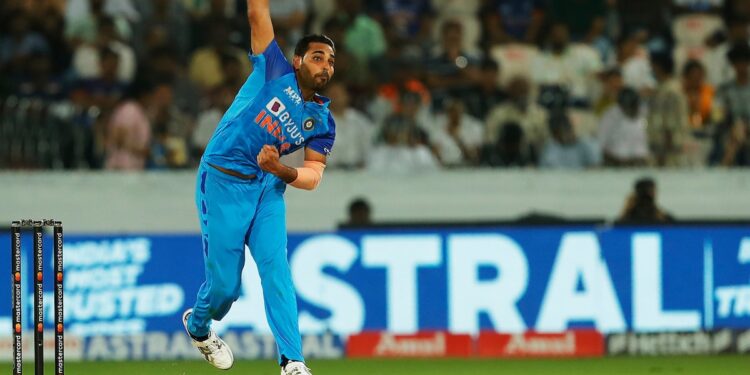 Improving bowling in India remains the team’s focus ahead of the Twenty20 World Cup next month, skipper Rohit Sharma said, adding that he is supporting Sear Bhuvneshwar Kumar to emerge from a recent slump. India passed Aaron Finch’s Australia by six wickets to take the three-match T20 series 2-1, now hosting South Africa for a white-ball series starting Wednesday. The team’s batsmen, including Virat Kohli and Suryakumar Yadav, were in good form, sharing a 104 run collaboration to secure Sunday’s win, but bowling in the final overs was a concern.

Kumar, once a champion of choking runs in the last overs of a T20 match, has been expensive lately. He leaked 21 runs left in the series decider in the 18th, with Tim David hitting him with two sixes and a four.

“We know he’s had more good days than bad in recent years,” Rohit said of the veteran fast bowler at a post-match press conference.

“Yeah, lately it’s not the kind of performance he wants, but that can happen to any bowler. You can also see the opposition, it’s not easy to bowl dead.”

The 32-year-old Kumar, who remains a key member of the team’s plans for Australia’s flagship T20, had just two wickets from two matches and an expensive economy rate of 1pm.

Rohit said the team will devise a better strategy in the three T20 internationals against the Proteas to help Kumar return to his miserly ways in the final overs.

“We have been working on some implementation plans and hopefully we can give him more options to catch up with death and he will be as good as before. And he has no lack of confidence,” said the Indian captain.

“We want him to come back as soon as possible because he has bowled those difficult overs in the past. As a team we believe in his abilities. Time for us to show that confidence in him and continue to support his skills.”

Spearhead Jasprit Bumrah and fellow speedy Harshal Patel returned to the team from injuries and Rohit said he expected the bowling unit to get back into shape with more playing time.

“Bowling is something we’re paying a lot more attention to than hitting right now,” Rohit said.

“Those three (Bumrah, Harshal and Axar Patel) who haven’t played much cricket in the past are playing now so you have to give them some time and get them back (in the rhythm) as soon as possible,” said Rohit.

“It’s about gaining their trust and with the kind of individuals they are, I don’t think it will take too long.”