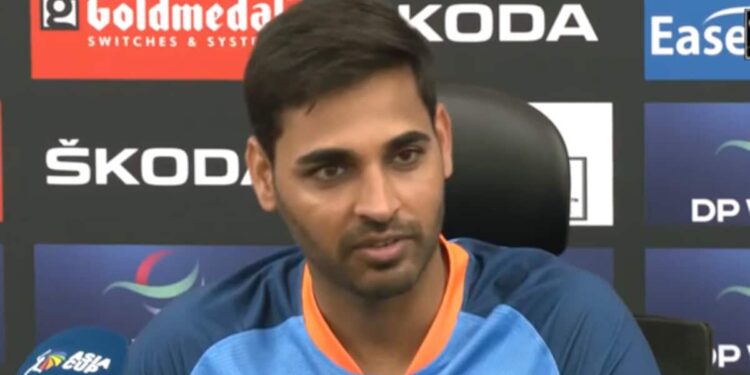 Veteran India pacer Bhuvneshwar Kumar has been in the eye of a storm since conceding 52 runs in 4 overs in the Mohali T20I against Australia. Several former cricketers have criticized Bhuvneshwar’s lack of pace and innovation in the death-overs, which contributed significantly to three significant losses for the team. He was tasked with throwing over 19th in the Asian Cup Super 4 matches against Pakistan and Sri Lanka and he loosened his rules on both occasions leading to India’s early exit from the tournament.

He had the same task as India defending 208 against Australia in the 1st T20I, but Bhuvneshwar was again incredibly bad at his execution when India lost.

Several former cricketers have called for a change in India’s strategy, including former Pakistani captain Salman Butt, who has been downright brutal in his assessment of the India pacer.

Speaking on his YouTube channel, Butt was asked by a fan to explain the need for pace as young Pakistani pacer Naseem Shah had also conceded runs against England in the 1st T20I.

Butt made it clear that when a bowler lacks pace, he has very limited opportunities to pose a threat to a batter.

“Well Naseem Shah may have gone for runs but he has suffered from big team hitters. If a bowler lacks pace he doesn’t have many options. Even in the 1st T20I against Australia he (Bhuvneshwar) was bowling outside the off-stump He did the same in the Asian Cup and it didn’t work.

“If you have pace, you can bowl a bouncer. Your slower one automatically becomes deceptive because the batter expects pace. As a bowler who is already slow and bowls a slower one, there is no element of surprise for the batter,” explained Butt in his scathing criticism of Bhuvneshwar.