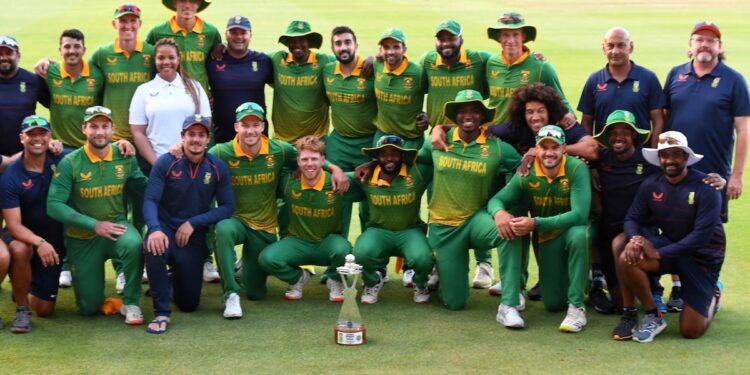 South African skipper Temba Bavuma was elated after the Proteas defeated India by four runs on Sunday at the Newlands grounds in Cape Town to claim the ODI series 3-0. Half centuries of Virat Kohli (65), Shikhar Dhawan (61) and Deepak Chahar (54) went in vain as India suffered a heartbreaking four-point defeat to South Africa. “I went a little crazy at the end. Probably the complacency got to us. Guys tried a few things that didn’t work out. Very satisfying, mission accomplished for us. Many people didn’t give us much chance. Hope through our performance, we have can get some supporters. Making good progress as a team. The challenge is to get better and better. Quinton has been great. Rassie also with the bat. He has been great. His game is starting to get better. to the next level Bowling has been decent,” Bavuma said during the post-match presentation.

“This was a big challenge, a big obstacle on our journey. To come out like we did – winning tests, winning ODIs convincingly will do a world of good. What I liked most – when you get to the test series look can you feel it is the hardest series I have been part of Indian bowlers ask questions regularly Even in the field the intensity We have been challenged physically – it has been very hot these past few weeks These conditions were not exactly South African – more like the subcontinent. Always nice to contribute to the team. I am enjoying my batting at the moment. At the moment things are going well,” he added.

Previously, Quinton de Kock and Rassie van der Dussen played knocks of 124 and 52 respectively, while South Africa put 287 points on the board. For India, Prasidh Krishna returned with three wickets.

India had also lost the test series 1-2 to South Africa. After that, Virat Kohli had decided to resign as test skipper.