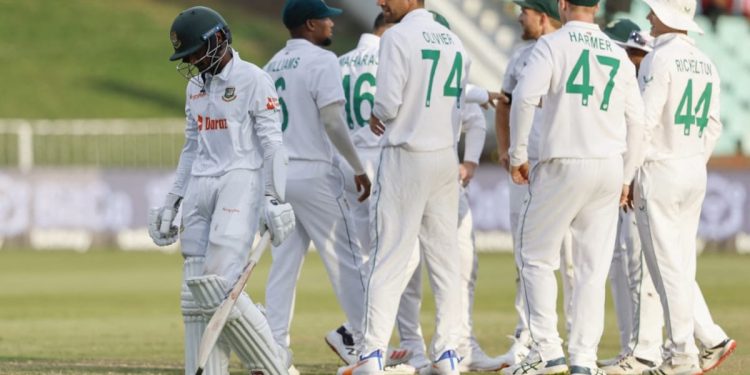 Bangladesh’s hopes of taking a historic first Test win against South Africa were badly dented when they got a horror start to their second innings at the end of the fourth day of the first Test in Kingsmead on Sunday. Bangladesh defeated South Africa for 204 in the second innings, leaving them with a 274 goal to win. There were only six overs possible before poor light ended the game, but South African spin bowlers Keshav Maharaj and Simon Harmer, sharing the new ball, brought Bangladesh back to 11 for three.

However, Bangladesh’s team director, former Test captain Khaled Mahmud, said he was proud of his team for giving itself a shot at victory.

In six previous Tests in South Africa, they have suffered five innings defeats and have never been in contention to beat the hosts.

“It can happen in cricket,” Mahmud said of the collapse of the highest order.

“There is still a chance, we still have seven batsmen to go. If we bat well and long, we have a good chance of being in this test match.”

“Whether we win or lose, I’m very excited,” said Mahmud.

“The boys threw very well and came back very strong to narrow their lead to 273. At one point they (South Africa) were hitting very confidently. All the bowlers did their job very well and we fielded brilliantly.”

Off-spinner Harmer had caught Shadman Islam slipping for nothing in the second over before left-armer Maharaj took two wickets in his third over.

Maharaj threw century maker Mahmudul Hasan for four in the first innings with a ball that drifted in and found a gap between bat and pad.

Bangladesh captain Mominul Haque scored two runs before going back on his stumps and getting stuck for the wicket.

It could have been worse. Najmul Hossain survived a call for a catch behind Harmer’s wicket when he had two.

Wicket-keeper Kyle Verreynne appealed, Najmul was not released and South Africa did not ask for a review. The repeats showed a faint edge. Najmul finished in five not out.

The late afternoon’s collapse undone much of the good work Bangladesh had done earlier in the day with an excellent bowling and fielding performance.

South Africa appeared to have the game under control when they reached 105 for one during lunch in their second innings.

But Bangladesh came back strong to knock out the home side for 204.

Dean Elgar made 64, his second half-century of the match, and newcomer Ryan Rickelton stranded at 39 as the last three wickets fell for two runs in seven balls.

Mehidy bowled with excellent control, just like in the first innings, allowing Mominul to use his fast bowlers in short periods of time.

“The ball has a lot of grip and it’s twisted more. Mehidy threw really well and their fast bowlers pushed to their limits and made it difficult for us from a scoring point of view,” said Sammons.

South African captain Elgar, who made 67 in the first innings, fell into the briefs twice, at 34 to Mehidy Hasan and 43 to Ebadot.

But Bangladesh made up for the mistakes with excellent catches by Yasir Ali on the slip and Shadman on the silly mid-off, while substitute Nurul Hasan delivered a direct hit from Harmer with a throw from the cover line.