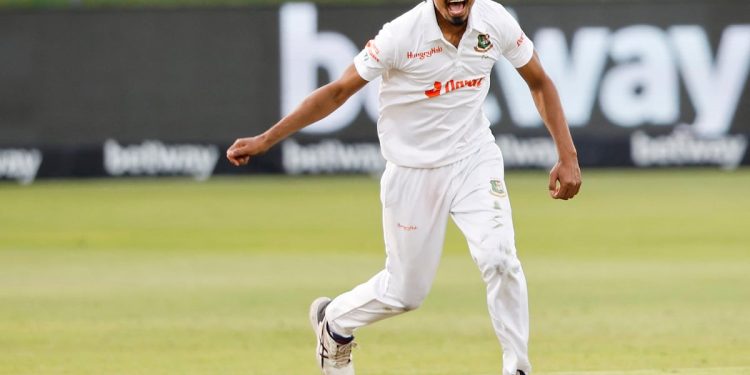 Bangladesh left arm spin bowler Taijul Islam took three wickets and prevented South Africa from dominating the first day of the second Test at St George’s Park in Gqeberha on Friday. Dean Elgar (70), Keegan Petersen (64) and Temba Bavuma (67) made half a century while South Africa made 278 for five after winning the toss. Taijul took three for 77 in 32 overs. He bowled unchanged from pre-lunch to post-tea in a first spell of two for 63 in 24 overs.

After controversy over the umpire during South Africa’s 220-run win in the first Test in Durban, two of Taijul’s wickets came after successful reviews.

Petersen was not initially knocked out by umpire Allahudien Paleker when he was struck on the pads after taking two steps out of his strike area.

Bangladesh reversed the decision, the ball was found to be in goal and television referee Adrian Holdstock decided that Petersen hadn’t moved the two meters needed to gain the referee’s advantage on the pitch.

The second successful review came when left-handed Ryan Rickelton attempted a reverse sweep and lobed the ball to Yasir Ali on the slip. Umpire Marais Erasmus turned down the call for a flyout, but replays showed the ball bounced off the glove covering his wrist.

Bangladesh could have taken a wicket in the third left of the day when an appeal to the leg for the wicket by Khaled Ahmed against Sarel Erwee was rejected but not judged, although replays showed the ball would have hit the top of the leg stump.

Erwee was eventually caught behind Khaled for 24 after an opening partnership of 52 with Elgar. Khaled took a second wicket when he let Bavuma catch low on the first slip by Najmul Hossain in the third over with the second new ball.

It was Bavuma’s 19th Test half-century and he was again unable to add to his lone century made in 2016.

South African captain Elgar made his third consecutive half-century hitting the ball sharp in an innings of 89 balls, including ten fours.

He said after winning the toss that he wanted his batsmen to score centuries and looked on course to lead by example until he was undone by good bowling from Taijul. He shoved a ball to wicketkeeper Liton Das, who rushed through it immediately after the previous pitch turned sharply at the left-hander.

Taijul, who did not play in Bangladesh’s 220-run defeat in the first Test, replaced injured fast bowler Taskin Ahmed, providing control that eluded Bangladesh’s other three bowlers early in the day.

South Africa scored with four runs per over before a 27-minute rain stoppage in the mid-afternoon. But they could only add 43 more runs for one wicket in 19 overs after the break and a further 79 runs for two wickets in 32 overs after the tea.