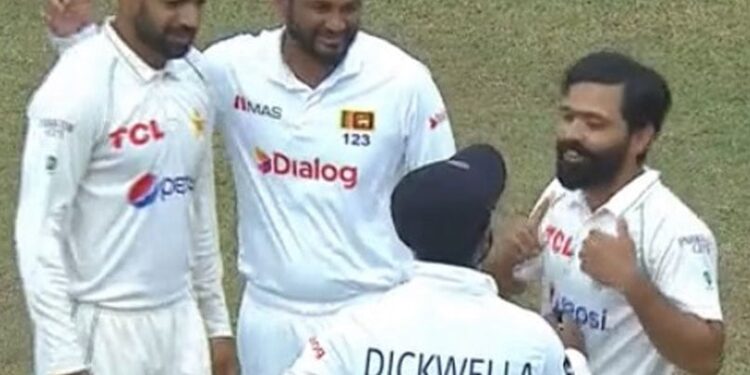 Sri Lanka tightened its grip on the 2nd Test match on Day 3 of the second Test match against Pakistan, despite a spirited comeback by the touring team’s bowlers. Pakistan was eliminated for 231 in its first innings, with Ramesh Mendis picking up a fifer. This gave the hosts a significant lead in the first innings, but the Pakistani bowlers regularly took wickets to deprive Sri Lanka of another distinct advantage.

The Lankans closed the third day game at 176/5 in the second innings, leading Pakistan by 323 runs with captain Dimuth Karunaratne and Dhananjaya de Silva in the middle.

While this is already a big goal for the fourth inning, the Lankans would like to make it above 400 and knock the Pakistanis out of the game, given that they had chased a big total in the first Test.

While the intensity between the two teams on the field was high, the players indulged in a friendly banter away from the action.

Pakistan Cricket Board shared a video of Sri Lankan wicketkeeper Niroshan Dickwella engaging in a conversation with Pakistani Fawad Alam, with both players laughing.

Lankan skipper Karunaratne and Pakistani pacesetter Haris Rauf were also nearby and were seen laughing and enjoying the chat between Dickwella and Alam.

The Test series is set in Sri Lanka at a time of great need in the island country with protests taking place due to the severe economic crisis in the country.