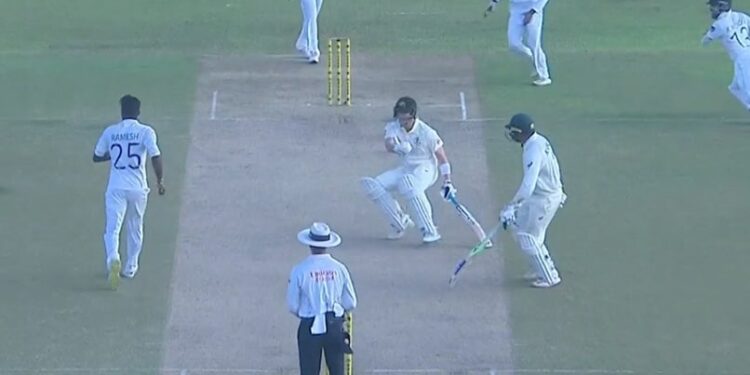 Nathan Lyon’s five-for-one helped Australia clear Sri Lanka for 212, before the hosts knocked back by three wickets in a fast-moving opening test on Wednesday. The tourists hit 98 for three at stumps after Sri Lankan spinner Ramesh Mendis struck twice, including David Warner’s key wicket for 25, on a spinning pitch at the picturesque Galle stadium. Hitting sixth after a mix-up with opener Usman Khawaja, undefeated at 47, Steve Smith returned to the pavilion and waved his hands in dismay.

WATCH: Steve Smith is furious after running out

Khawaja and fellow lefthander Travis Head, on six, trailed Australia by 114 runs in their first innings.

Mendis, an off-spinner, caught Warner lbw after the southpaw opener hit five limits in an attacking stay at the wicket.

Marnus Labuschagne was out for an attempted reverse sweep, but it was Smith’s wicket that brought the home crowd to life. The former captain was rejected halfway through for a quick single by Khawaja and was unable to reach the fold despite a desperate dive.

Khawaja, who survived a missed punch from wicketkeeper Niroshan Dickwella, continued to fight until the end of the game.

Earlier, Dickwella made a challenging 58 before the Sri Lankan innings folded in the third session after the hosts decided to hit first at the start of the two-game series.

Lyon, who bagged his 20th five-wicket catch in Tests, paired up with fellow spinner Mitchell Swepson, a leg spinner who took three wickets, to rattle the opposition batting.

Fast bowlers Pat Cummins and Mitchell Starc struck early with a wicket each as Sri Lanka lunched at 68-2. The spinners soon took the lead on a field traditionally known to assist the slow bowlers.

Left-handed Dickwella counterattacked during his 59-ball stint on the crease and instigated key partnerships, including a 54-run stand with Mendis, who made 22, for the seventh wicket.

Dickwella hit his fifty from 42 balls in the second session, but Lyon eventually got him out and also sent Mendis back after tea.

Lyon got his fifth wicket in Lasith Embuldeniya and Swepson, who was denied a hat-trick by Dickwella, ended the innings after 59 overs.

Angelo Mathews also contributed to the Sri Lankan total with his 39 and was broken by Lyon with Dickwella in a 42-run tie.

Listen to the latest songs, only on JioSaavn.com
The island nation, which won the one-day international series against Australia 3-2, is facing an unprecedented economic crisis, with people across the country struggling to pay for food, fuel and other necessities.