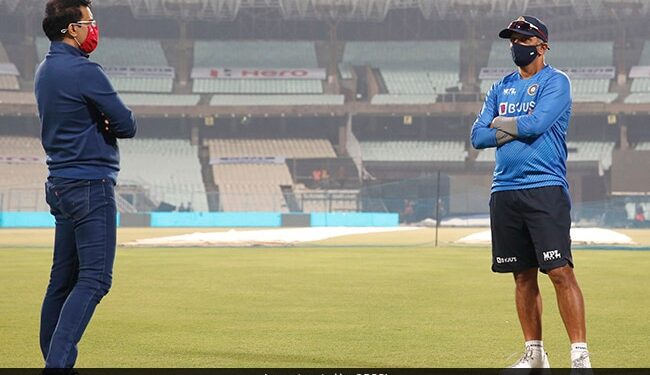 Sourav Ganguly and Rahul Dravid met at the iconic Eden Gardens in Kolkata on the eve of India vs West Indies 1st T20I. Board of Control for Cricket in India (BCCI) posted on Twitter on Tuesday a photo of Ganguly, the BCCI president and Dravid, the current head coach of Team India. “When two legends of Indian Cricket met in the Eden Gardens,” BCCI wrote in the caption. Ganguly and Dravid go way back. Ganguly and Dravid were part of some of the most memorable moments in Indian cricket, from going head-to-head in junior cricket to making their test debut in the same test match and then playing under each other’s captaincy for India.

To put Ganguly and Dravid’s association into perspective, the former southpaw played 424 matches for India, of which Dravid was a part of 369, which is nearly 90% of his international career.

Eden Gardens has also seen a fair amount of Ganguly and Dravid camaraderie. The duo have played eight Test matches and two ODIs together at the same venue, which will kick off the three-match T20I series in India against the West Indies, which starts on Wednesday. All three matches will be played on this field.

India has whitewashed the West Indies in the three-match ODI series but will likely face tougher competition in T20Is from the visitors, who have historically been one of the best sides in the game’s shortest format.

India has a full white ball calendar in the run-up to the T20 World Cup in exactly eight months. They then take on Sri Lanka in three T20Is, followed by a Test series. Captain Rohit Sharma therefore wants to “identify” players and give them a fair chance.

“We just want to give the other guys a chance and be ready for that. We have a very full schedule and injuries will definitely happen. So it’s important that we give the guys who are going to fill those roles enough playing time as well,” he added .