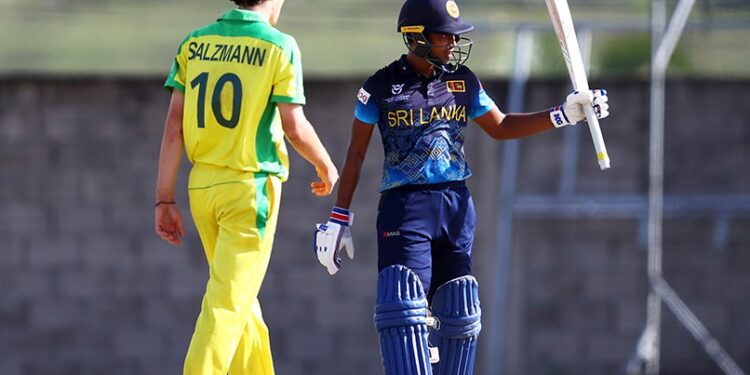 Sri Lanka defeated Australia by 4 wickets on Monday in their second match of the ongoing U-19 World Cup at the Conaree Sports Club, Basseterre, St Kitts. Captain Dunith Wellalage put in an inspiring performance with both bat and bowl as Sri Lanka won the match with ease. After putting Australia first at bat, the Sri Lankan skipper took five for 28 as Australia’s middle class collapsed completely in St Kitts, before finally being knocked out for a total of 175.

Campbell Kellaway scored a fine half-century, but his 54 hit wasn’t enough for Australia as the rest of the batters failed to impress against a disciplined bowling attack in Sri Lanka.

Sri Lanka chased a goal of 176 and won the match with four wickets and 13 balls left, while Wellalage finished off a brilliant individual performance with a score of fifty (52).

Sri Lanka faltered at one point 49 for four before Wellalage and wicketkeeper Anjala Bandara got their chase back on track and added 70 runs for the fifth.

After their firings, Ranuda Somarathne invaded with a valuable 32 point knockout as Sri Lanka went on to win the game with ease.

With this win, Sri Lanka retained first place in Group D with two wins, while Australia is in third place behind the West Indies, which defeated Scotland in the other match.

Sri Lanka now face the West Indies in their final group stage match on January 21 in St Kitts, while Australia will face Scotland on January 19 in a bid to secure a spot in the next round.