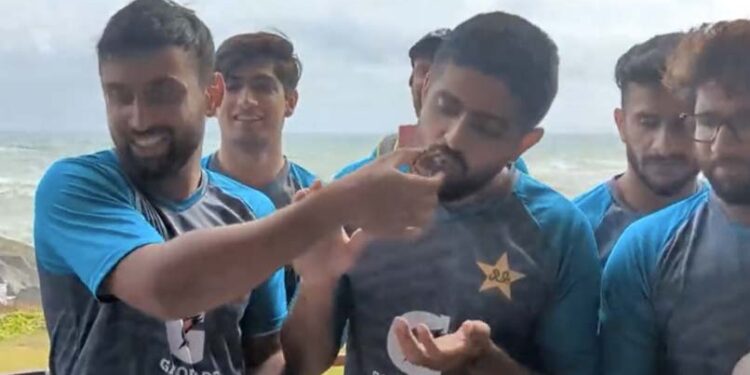 It was a momentous occasion for Pakistan as Abdullah Shafique hit an epic 160 to anchor his team’s record chase of 342 in Galle as the tourists won a thrilling opening test against Sri Lanka on Wednesday. The opener capped off his marathon show with the winning runs in the final session on day five, jumping for joy and pumping his fist as Pakistan triumphed by four wickets for a 1-0 lead in the two-match streak. Left arm spinner Prabath Jayasuriya took a nine-wicket match but his efforts were in vain as the visitors battled past Sri Lanka’s previous best chase in Galle of 268 against New Zealand in 2019.

After the match it was a party for Babar Azam and Co. They gathered at a sea beach and cut a special cake.

22-year-old Shafique excelled with his second Testton. He built crucial partnerships, including a 101-run third-wicket score with skipper Babar Azam, who made 55 after his 119 in the first innings on a tricky pitch to save.

“We know how to play spin, so we believed,” Azam said after the thrilling win. “When I fought with Abdullah Shafique, we were just trying to build a partnership. He showed his class.”

Shafique, who was named man of the match, said: “It was hard, but over time it got easier. Babar is one of the best in the world. We learned so much from him. I enjoyed working with him hitting in the middle.”

The undefeated Shafique eventually paired up with Mohammad Nawaz, 19 not out, to take the visitors home after a brief rain stoppage halted their attack. The teams had had early tea before returning for the third session of play.

Shafique survived three dropped catches, at 70, 135 and 151, but earned his luck and played the anchor role to perfection when he beat his previous test best of 136 not out.

Pakistan had some anxious moments after Jayasuriya, who returned talisman Azam before the end of day four, struck right before lunch to knock out debutant Salman Ali Agha for 12.

Hasan Ali fell for five in the second over of the second session after being promoted in order to score the remaining runs.

Lonely Man Jayasuriya
Jayasuriya, who took 12 wickets on his debut in a series-leveling Test win over Australia at the same venue last week, six in each innings, kept up the pressure, but Shafique held out.

Pakistan resumed the day at 222-3 and Sri Lanka soon used their remaining two umpire reviews, with Jayasuriya involved in both calls.

Mohammad Rizwan opened his day account with a border with Ramesh Mendis and kept his positive intentions by taking singles and twos before falling to Jayasuriya for £40.

“With the ball we couldn’t support Prabath from the other end. We had to give him more support,” skipper Dimuth Karunaratne said of his lead spinner, who toiled for 95.2 overs in the two innings combined. A review didn’t save Rizwan, a wicketkeeper batsman who has come into the run of two games after a successful spell with England’s county of Sussex.

Dinesh Chandimal kept his excellent form in an unbeaten 94 – his second consecutive half-century – when he ran out of partners in Sri Lanka’s 337 tally in the second inning.

In a game of tail-fighting, Azam hit a challenging century in Pakistan’s first innings, patiently batting with the lower order after the visitors dropped to 85-7 on day two.

The second Test starts on Sunday, also in Galle, after it was moved from Colombo due to political unrest in Sri Lanka.