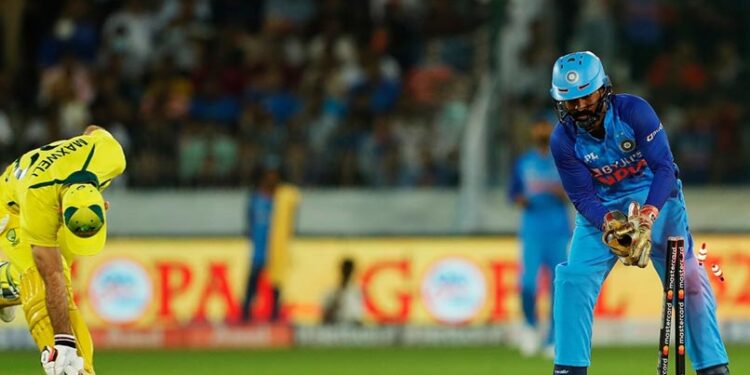 After Cameron Green gave Australia a blistering start in the third T20I in Hyderabad, India came back strong. After Bhuvneshwar sent off Kumar Green for a 21-ball 52, Glenn Maxwell and Steve Smith also fell in quick succession. Maxwell’s run was controversial, however, as Dinesh Karthik accidentally punched a stump before getting the ball. But luckily for him, the other bail was still sitting on the stumps and when the ball hit and cleared him, the third umpire thought he was out.

Maxwell wasn’t too happy about it, but the Indian camp was in a good mood. A relieved Rohit Sharma even went to Karthik and kissed him on his helmet.

ICYMI – Rocket toss from the deep end by @akshar2026

And then a little luck #TeamIndiahis side…

It was some lightning-fast work from Axar Patel in the field that led to Maxwell’s run-out, and the dismissal saw Australia down three wickets.

After India brought Australia to work, Green handed the visitors a flyer in the series decider, taking the bowlers to the cleaners even as Axar removed Aaron Finch. He reached his half-century in just 19 balls, but fell two deliveries later.

It was the second half-century of the series for the tall all-rounder, with 61 of 30 deliveries in the first T20I, with Australia chasing 209 to take the lead in the three-game match.

However, India won the second T20I to tie the series ahead of the Hyderabad match.