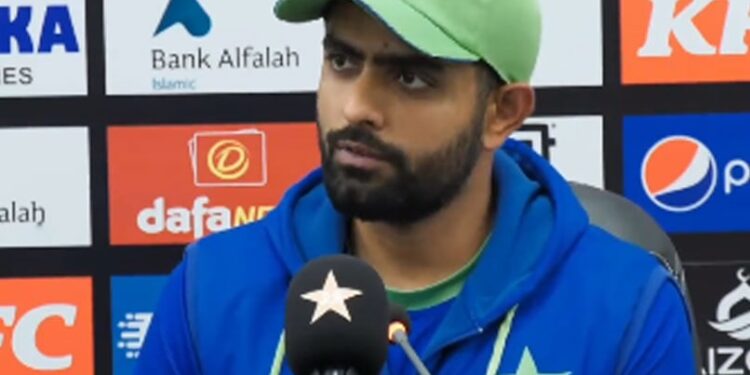 Pakistan suffered a 74-run defeat to England in the first Test of the three-match series at Rawalpindi Cricket Stadium on Monday. The Three Lions opted to bat first and hit a whopping 657 runs, setting a world record of over 500 runs on the opening day. In return, Pakistan gave a brilliant reply with a total of 579 runs. However, the Babar Azam-led side failed to go beyond 74 runs while chasing the target of 343 in the fourth innings of the match. After this loss, Team Pakistan including skipper Babar Azam faced heavy criticism from fans and former cricketers. Babar scored a century in the first innings but was sent back to the dugout for 4 runs in Pakistan’s second innings.

It was in the sixth over of Pakistan’s pursuit when Ben Stokes delivered a short ball to Babar which stuck to the inside perimeter and went straight into the hands of wicket-keeper Ollie Pope. During the post-match press conference, a journalist asked the Pakistani skipper about his dismissal and said, “Kal aap jiss ball pe out huye the, kya aapko woh samajh nehi aayi thi ya kya mamla tha? Aap jaise bade batsman aur aise ball pe out huye (The ball you were sent off in, you misjudged that ball. I mean you’re such a big batsman and you got out in that kind of pitch).”

Babar Azam talks about his dismissal in the 2nd innings of the 1st Test.#PAKvENG pic.twitter.com/jylnwabFWF

Coming to the match, fast bowlers Ollie Robinson and James Anderson took four wickets each as England secured a thrilling 74-run victory over Pakistan. Anderson took 4-36 and Robinson 4-50 on a calm Rawalpindi Stadium pitch to dismiss Pakistan for 268 as the stadium floodlights glowed as daylight faded.