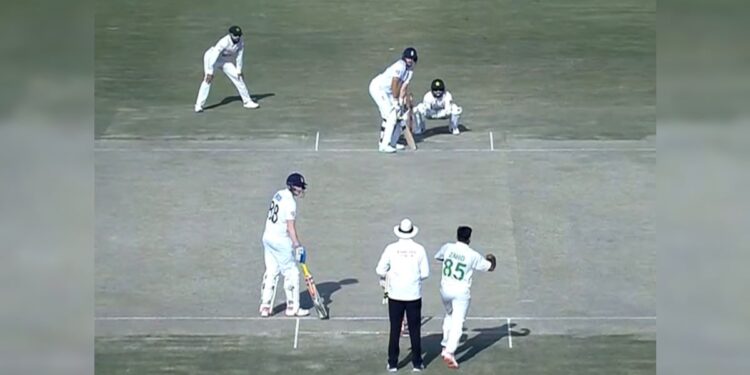 England batsman Joe Root batted left-handed during the first Test against Pakistan on Sunday. Taking full advantage of batting-friendly conditions in Rawalpindi, Root switched to a southpaw mode as he batted against right arm spinner Zahid Mahmood for the first two deliveries of his sixth over. Root swept the ball one to square leg, but was dropped mid-wicket on the next ball by Naseem Shah. The batter quickly abandoned the idea and reverted to his right-handed batting stance, but was dismissed for 73 by Mahmood after being caught by Imam-ul-Haq.

In their first innings, Pakistan were bowled out for 579, in reply to England’s score of 657 in the first innings. They were trailing the game by 78 points at the time.

Babar Azam (136) scored a brilliant barrel, with openers Imam-ul-Haq (121) and Abdullah Shafique (114). Will Jacks (6/161) was fantastic for England with the ball. Jack Leach took two scalps while James Anderson and Ollie Robinson took one wicket each.

Zahid Mahmood (4/235) and Naseem Shah (3/140) were the bowlers’ favorites for Pakistan. Ali took two while Haris Rauf also got a wicket.