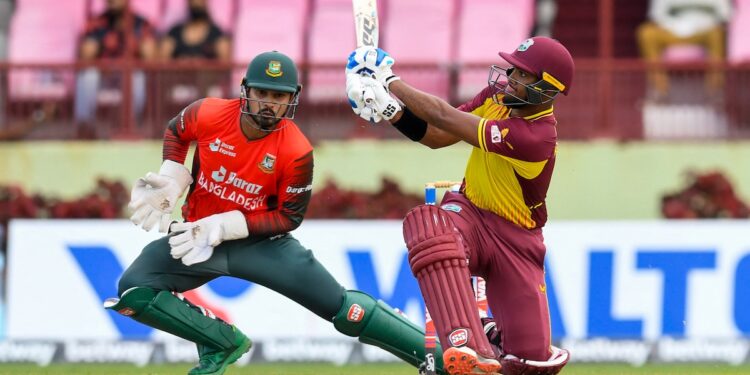 Captain Nicholas Pooran was at his devastating best blowing up the West Indies to a comfortable five-wicket victory over Bangladesh in the third and final T20 International at the Guyana National Stadium on Thursday. Pooran’s unbeaten 74 and 55 from lead-off hitter Kyle Mayers anchored the home side’s chase of 163 visitors total for five. The hosts reached 169 for five with ten balls left to win the series 2-0 after the first game in Dominica ended in a rain-ruined tie-breaker last Saturday.

Pooran came to the crease with the innings at 43 for three in the seventh left, and showed himself from the start. With fellow southpaws Mayers following suit, the pair transformed a potentially tough challenge towards the end into a leisurely gallop into a heady fourth-wicket stance of 85 from eight overs.

The home skipper responded in the best possible way to repeated criticism over his run of low scores and poor shot selection, hitting five sixes and fours in an inning that took just 39 deliveries.

“I absolutely love Guyana and am thrilled to perform here,” Pooran said after receiving the “Man of the Match” and “Man of the Series” awards. “I ask my players to trust me, even if they don’t always like me.”

Mayers, whose stature continues to grow across all formats after being named “Man of the Series” in the previous game with two tests, crushed five sixes and two fours in his 38-ball innings before falling from left-spinner Nasum Ahmed in past the 15th.

The result was then a formality. Pooran sealed the win with a towering straight six from his Bengali counterpart Mahmudullah.

Mahmudullah had chosen to bat first and owed Afif Hossain and opener Liton Das what appeared to be a challenging total.

They put up 57 for the third wicket before Mahmudullah contributed 22 in a 49-run fourth wicket tie with Afif.

However, they struggled to accelerate towards the end of the innings with the West Indian spinners, especially Hayden Walsh (two for 25), which proved effective in slowing the flow of runs.

“That collaboration between Mayers and Pooran has taken the game away from us,” acknowledged Mahmudullah. “Our bowlers should have stuck to their lines. It really needs to improve.”

Both teams will remain in Guyana for a three-game One-Day International series that begins Sunday.