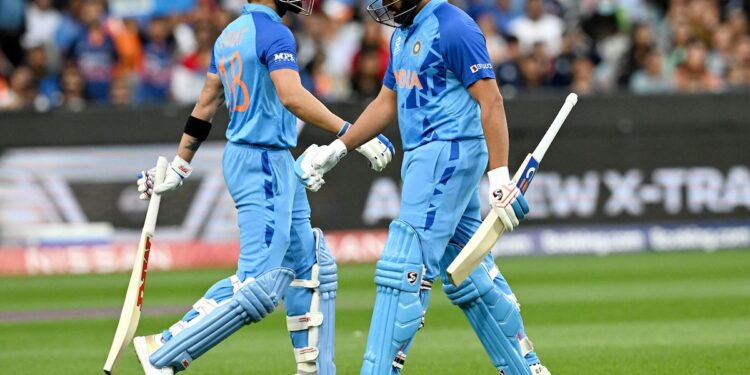 Following the 2022 T20 World Cup where the Rohit Sharma-led Indian cricket team lost to England in the semi-finals, there have been widespread calls for changes in the team’s strategy. This was Rohit’s first ICC tournament as skipper. He took over the reins of the team after Virat Kohli resigned. The duo are two of the best Indian hitters of the current generation and comparisons between the two have often been made. Some on social media have also speculated about the duo being compared to each other. When former India coach Ravi Shastri was asked about the subject of ‘Virat Kohli vs Rohit Sharma’ in a recent interview, he was clearly annoyed.

“Woh sab bhaar mein gaya (to hell with that subject). That’s just a time pass for you guys, I don’t have time for those things. They have a good rapport. Everything is going first class. And you cook khichdi here. I have here no time for that. These are small things,” Ravi Shastri said on journalist Vimal Kumar’s YouTube channel.

Speaking about the young Indian players in the current squad, he said during Prime Video’s post-match coverage, “Washington Sundar, I thought it was very good. And even Umran Malik, I like the way he bowls. There’s potential there If he can hold on, it’ll be very good.

“Overall there was a very positive Shubman Gill at the start of the innings. These conditions are tough, you don’t get these conditions very often and you don’t travel to New Zealand that often.

“So I think it’s excellent for young cricketers to come here and get this kind of exposure. The weather and the dimensions of the ground have to be taken into account.”