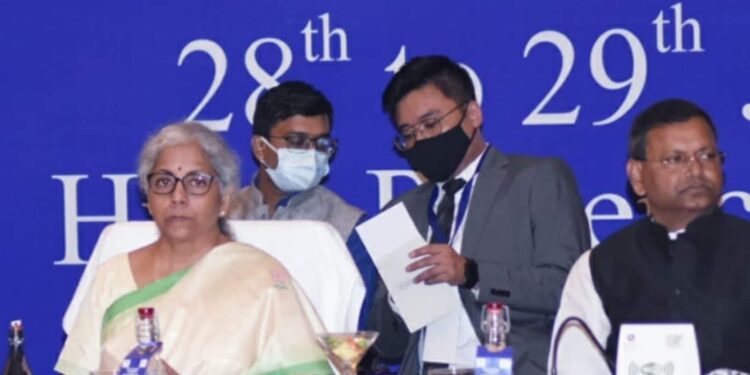 Chandigarh, June 28: States ruled by opposition parties have demanded that either the revenue-sharing formula under the GST regime be changed or the compensation period extended by five years, amid concerns about lost revenue. The Goods and Services Tax (GST) was introduced on July 1, 2017, and states were assured of compensation for the loss of revenue due to the rollout of GST through June 2022.

When the GST council kicked off here on Tuesday, states also cited a recent Supreme Court ruling that council decisions are not binding and states are not required to abide by them. The court’s ruling is seen by some as states that have powers to set taxation.

The finance minister of Chhattisgarh, TS Singh Deo, said the current formula for dividing the revenues of the GST equally between the Center and the states should be changed, giving a larger share of 70-80 percent to states. Kerala Finance Minister KN Balagopal said the GST state compensation mechanism should be expanded to compensate for the loss of revenue.

“Almost all states are asking for an extension of the compensation period,” Balagopal said. In a letter to Union Finance Minister Nirmala Sitharaman, who chairs the GST council meeting here, Deo said his state has suffered a huge loss of revenue under the GST regime, mainly because mining and manufacturing states have suffered the most from GST. what a consumption tax. “We are presenting the proposal in the GST Council to proceed with the 14 percent protected revenue provision. If the protective revenue provision is not continued, the 50 percent formula for CGST and SGST should be changed to SGST 80-70 percent and CGST 20-30 percent,” said Deo, who cannot attend the meeting due to COVID. -19 infection.

Otherwise, the current compensation mechanism, he said, would have to continue for another five years. Currently, revenues from the GST are split equally between the Center and the states. The collection of cess levied on luxury, demerit and sin goods is fully used to compensate states for lost revenues due to GST implementation.

The two-day GST council meeting, currently underway in Chandigarh, is scheduled to discuss the compensation mechanism after the five-year period decided at the time of the GST rollout. While states’ protected revenues have grown at a 14 percent compounding rate, cession collection has not increased at the same rate, and COVID-19 has widened the gap between protected revenues and actual revenue receipts, including a reduction in collecting the assignment.

In order to fill the shortfall of funds of the states due to the short release of compensation, the Center lent Rs 1.1 lakh crore in 2020-21 and Rs 1.59 lakh crore in 2021-22 as back-to-back loans to meet some of the shortage of cess collection. According to revenue growth data collected for the Council meeting, only five of the 31 states/UTs of Arunachal Pradesh, Manipur, Mizoram, Nagaland, and Sikkim recorded revenue growth that exceeded the protected revenue rate for states under the GST in the 2021-fi year. 22.

Puducherry, Punjab, Uttarakhand and Himachal Pradesh recorded the highest revenue gap between protected revenue and gross GST revenue after settlement in 2021-22. According to a study by the Reserve Bank, the weighted average tax rate under the GST has fallen from 14.4 percent at the time of launch to 11.6 percent in September 2019. In the letter to Sitharaman, Deo said Chhattisgarh suffered a loss of revenue of Rs. 4,127 crore in the last fiscal year, Rs 3,620 crore in 2020-21, Rs 3,176 crore in 2019-20 and Rs 2,786 crore in 2018-19.

The most pertinent issue brought to her attention is the termination of the 14 percent protected income provision due on June 30. Request for a five-year extension to protect the states from serious loss of revenue and allow them to function as an effective federal unit of India, Deo tweeted. Recalling the recent Supreme Court ruling regarding the power of the GST council, Deo said: Unless we in the GST council as its members unilaterally ensure financial stability by realizing rational revenues for every state and Union territory in India , then the whole concept for what the GST council has created may seem untenable.

Separately, Amit Mitra, chief adviser to West Bengal Chief Minister Mamata Banerjee, said that in light of the recent Supreme Court ruling, all Council decisions should be taken by consensus. “Following the decision of the Honorable Apex Court, it has become imperative for the GST Council to make every decision by consensus and disregard any hint of the age of consent, not only for the future credibility of the GST Council, but also for upholding the rich tradition of this exalted body,” wrote Mitra, former WB Finance Minister. The Supreme Court had ruled in the Mohit Minerals Ocean Freight case that the GST Council’s recommendations are not binding and are only persuasive. It ruled that parliament and state legislators can legislate on GST equally.