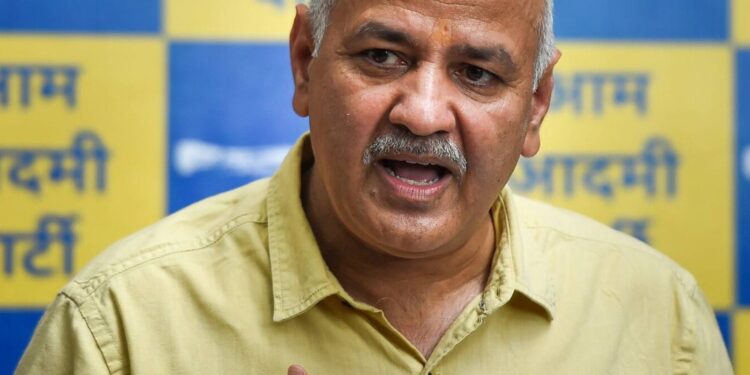 Delhi Deputy Chief Minister Manish Sisodia, who is under scrutiny for his role in Delhi’s excise policy and education controversy, joins News18’s Rupashree Nanda at BR Ambedkar School of Specialized Excellence, Kalkaji. BR Ambedkar School is one of the model schools of the Government of Delhi and has many facilities such as table tennis room, counseling room, libraries and more.

News 18: The charge against you is that no offers were made as the charges escalated by Rs 326 crores.

Look at this library. Let alone government schools, few private schools have such large libraries. Their problem is why have we built such great libraries for kids studying in government schools? Who are these children? Where do they come from? A student living in the Indira camp is the daughter of a schoolteacher, another is the son of a gardener, the third is the child of a tailor, the fourth is that of a schoolteacher, and the fifth is the child of a clerk in a private office, the sixth is the daughter of “cutter master.”

BJP has a problem with why these kids got such good libraries and studied in such a great atmosphere. Look at the floors, so much money is being spent. They are not concerned about the money being spent. They are concerned that we have built great schools for children from such ordinary backgrounds. Perhaps ‘tavedes’ should be built, or ‘kabadkhane’ that the BJP government in Gujarat has been building for 27 years. My crime is that I built such great schools.

Look, the government has already responded to the CVC report. CVC reports contain some observations, CVC CAG reports contain some observations and they are always answered. But BJP asks why so many rooms were built? Now, if this school has more demand for children, I would build more rooms here and provide more children with facilities to study. They ask why you built so many toilets, so many rooms. Look at this – this is a treatment room. They ask why children who study in government schools need chaperones? They ask why you built so many toilets.

CVC Report Claims Laundry Rooms Have Been Passed On As Classrooms?

We have built toilets. They are also rooms. How does it matter? Look here – this is a space for sports, some are built for libraries, some for toilets, classrooms. It’s all rooms, at the end of the day. Are we staying in these rooms? This is a table tennis room, do we play in this room, don’t children play here? Here’s a chemist’s kid practicing in this large table tennis room. That’s their problem – why did we give these kids such good facilities? I will provide such facilities. I am the Minister of Education, it is my responsibility to provide good facilities for children. You are welcome to do whatever you want.

You get it in the CVC report. This is our answer. Here are the schools. Here are the kids. Is there fraud? Did we build rooms and just cover them with sand? The rooms, the schools and the facilities are visible to everyone. They say Manish Sisodia has surrendered to ghotala (scam). If this is a ghotala, every minister of education should surrender to such ghotalas.

I’ll ask the question again: have you passed toilets on paper as classrooms?

That’s not the problem. The problem of the BJP is not that toilets have been built, the problem of the BJP is why so many toilets have been built? You read their accusations, watch their press conferences. They claim that instead of the sanctioned 1000 toilets, why did you build 2000? Children, teachers, ladies children and girls children among them will come to the schools, are there no toilets needed?

The lieutenant governor’s office has claimed that the CVC report has been withheld for two and a half years.

Where have we suppressed notifications? We have not done such a thing. It takes time to answer these. We have given our answers. The CVC report is not the question. Now let me show you what’s happening here… (young kids learn music in the music rooms) – BJP has a problem with why the kids from poor and economically disadvantaged backgrounds get such a great education. BJP cannot digest this. This should only be accessible to the privileged class, what are children from ordinary backgrounds who get such great music teachers such facilities? To build such rooms, money will have to be spent. And we spent that money. And we are proud of that. All education ministers and prime ministers of all states of all countries should do this. PM shouldn’t be trying to make his friends rich. Tomorrow, when these children get a great education, even they will be rich.

In retrospect, do you think that if the processes had been followed, there would not have been such controversy?

BJP is lying. We have followed all processes. There is no process that we have not followed. But BJP only knows how to hinder the work. Prime Minister Kejriwal always says that one must learn from the other. If there is a torn paper stuck to this door how can you say it is from Arvind Kejriwal’s school. We say that children are taught in the schools of Arvind Kejriwal in a great way, you can do the same. We can visit your schools, if you did a good job we can learn from you, we can improve the schools. But they are not interested in that.

Are you concerned that there is almost a breakdown in communication between the lieutenant governor and the prime minister? It could lead to a constitutional crisis.

It is a pity that people who hold constitutional positions – the lieutenant governor, the prime minister, are constantly thinking about how to stop the education of these poor children, how to trap the poor in poverty and how to enrich their friends. We are constantly thinking about how we can give poor children a good education and how we can improve the lifestyle of poor people. That’s what the fight is about. In this fight we will face each other face to face against all who stand in opposition.