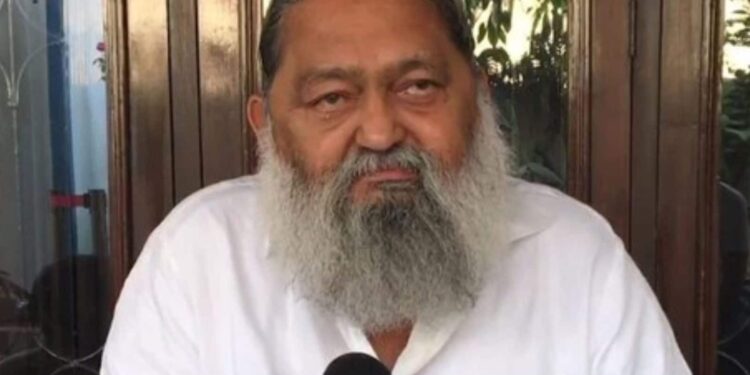 Haryana Health Minister Anil Vij said on Friday that he hoped for an early resolution of protests by MBBS students over the state government’s bond policy.

When asked about his comments about doctors at PGIMS-Rohtak going on indefinite strike in solidarity with the agitation by MBBS students, Vij said he had spoken to Chief Minister Manohar Lal Khattar about the matter.

“I have spoken to the prime minister and the officials involved and I am hopeful that the problem will be resolved within a day or two,” Vij told reporters.

He told the striking doctors that holding protests was their democratic right, but that they also had to take into account the interests of patients.

Aside from emergency and trauma services, OPDs (outpatient departments), wards and elective surgeries remain suspended until their demands are met, they said. The Manohar Lal Khattar-led government had earlier said that only candidates who have deposited the Rs 10-lakh bond as per its November 2020 policy will be eligible for admission into MBBS courses in government medical colleges from the upcoming academic session .

However, on November 2, Khattar said that no student would be required to deposit the deposit amount at the time of admission for MBBS courses in government colleges.

The demands of the MBBS students include a reduction in the length of compulsory civil service from seven years to one year and the standard amount of the bond not to exceed Rs 5 lakh.

According to an official statement, the students were told that the sole purpose of the policy was to meet the shortage of doctors in government hospitals and that it was entirely in the best interest of the common man.

The students were also told that if they still had objections or reservations about a particular subject, they should do so in writing and the government would give their demands favorable consideration.

The officials also appealed to the students to call off the strike because the patients were having problems.

Senior Congress leader Randeep Singh Surjewala denounced the Khattar government over the issue, saying, “Manohar Lal ji, if there is even an ounce of decency and morality left, instead of threatening the struggling medical students for their legitimate demands, comply with their perfectly reasonable and legitimate demands immediately.

“Also apologize to the people of the state who are facing inconvenience,” he said in a tweet in Hindi.

Surjewala also posted a Nov. 24 office order issued by the PGIMS-Rohtak authority directing the students to immediately break off their strike and said that only then would their demands regarding policy changes be negotiated.

If the strike is not called off immediately, actions such as vacationing hostels (by the hostellers) will be taken within 24 hours, the order said.

The former prime minister said medical students had been agitating for a month but the government remained “indifferent and insensitive”.

“In PGI Rohtak, students are on hunger strike and protest, but the government has chosen to remain indifferent to their protests and it seems that the suffering of the students makes no difference to the government,” Hooda said in a statement Friday.

”Now GPs and other medical staff have also come to support the students. Because of their strike, the patients are in a lot of trouble,” he added.

The congressional leader said that instead of ending the standoff, the administration is continuing to “escalate this into a confrontation.” “Instead of responding to the legitimate demand of the students, the government is threatening them. Students are threatened with eviction from the hostel and an FIR against them,” said Hooda.