IITs are the pride of the nation: President Droupadi Murmu 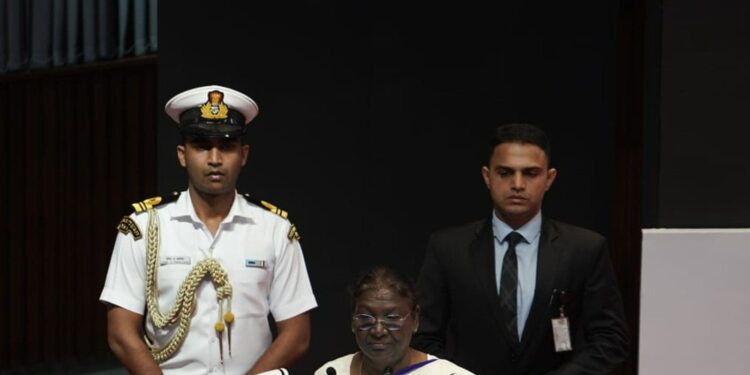 The Indian Institutes of Technology have been the pride of the nation, said India’s President Droupadi Murmu. She spoke today at the closing ceremony of the IIT Delhi Diamond Jubilee celebrations in New Delhi.

“India has a great talent pool that has yet to be fully exploited. We need to future-proof our institutions with new teaching and learning statistics, pedagogy and content,” she said.

The president said the IITs helped India prove to the world India’s prowess in education and technology. In several ways, the story of the IITs is the story of Independent India.

Faculties and alumni of IITs have shown the world what India’s brainpower can do. Students who have studied in IITs are now at the forefront of the digital revolution sweeping the world. The impact of IITs has gone beyond science and technology. “IITians are leaders in all walks of life – in education, industry, entrepreneurship, civil society, activism, journalism, literature and politics,” she said.

Read | Save your native language, use it for conversations at home: Amit Shah urges students

As one of the original IITs, IIT Delhi has been a mentor to some of the club’s recent members – IIT Ropar and IIT Jammu. IIT Delhi has contributed significantly to building the image of the IITs as centers of excellence around the world, she said.

IIT Delhi has always seen itself as part of the wider community and has been extra sensitive to its responsibilities to society. She shared that the latest example of IIT’s social care was seen during the early stages of the pandemic. IIT Delhi took on the challenge of containing the virus and came up with a number of important research and development projects. It even designed and developed rapid antigen test kits, PPE, antimicrobials, high-efficiency face masks and inexpensive ventilators. “IIT Delhi’s contribution to India’s fight against the Coronavirus has been a model of how engineering and technology institutions can also play a role in a public health crisis,” she added.

The President of India said that by 2047, when we will celebrate 100 years of independence, the world around would have changed drastically, all because of the fourth industrial revolution.

Like 25 years ago, we never imagined today’s world, we can’t imagine today how artificial intelligence and automation are going to transform life. With our high populations, we must have foresight and strategies to face the forces of the future, where disruptions will be a new normal. The nature of employment will completely change,” she said.

She added: “If we take steps to protect ourselves from the vagaries of the future, we can reap rich demographic dividends. We need to make our institutions adaptable to the future. This requires a new teaching-learning matrix,
pedagogy and content that are future-oriented. I am sure that with our famous IITs we will be able to educate the younger generation with the necessary knowledge and skills to meet the challenge. India will benefit immensely from the next wave of the tech revolution.”

She pointed out that climate change poses a serious challenge and said that as a developing country with a high population base, India’s energy needs for economic growth are very high. The president added that we must shift from fossil fuels to renewable energy and in the coming years, as the world anxiously searches for technological solutions to environmental challenges, she believes India’s young engineers and scientists will help humanity achieve a breakthrough. reach.