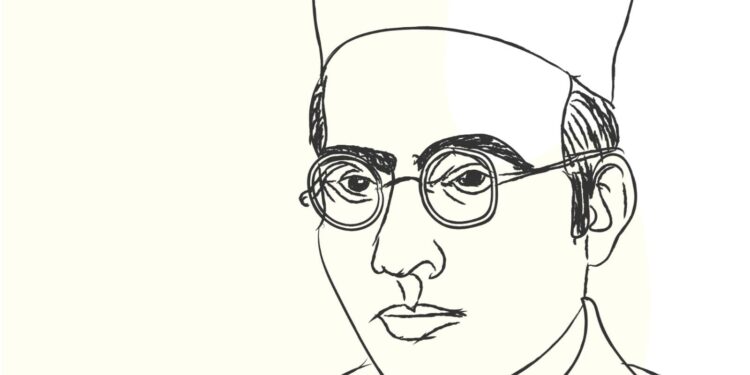 A grade 8 textbook in Karnataka is under fire for a chapter on Vinayak Damodar Savarkar. In the revised high school curriculum, a passage in the Kannada textbook claims that during his captivity in Andaman prison, Savarkar sat on the wings of a bird every day and flew to his homeland.

“There wasn’t even a keyhole in the cell where Savarkar was locked up. But Bulbul birds visited the room, and Savarkar sat on their wings and flew to the motherland every day,” the Kannada passage read.

The textbook in question is a second language book for grade 8. The chapter introduces Savarkar to students and is followed by an excerpt from a travel journal by Kannada writer KT Gatti after his visit to the Andaman Cellular Jail. Savarkar was imprisoned in Andaman Cellular Prison between 1911 and 1924.

Several teachers have also objected to the paragraph, saying that if the writer has metaphorically praised Savarkar, there is no objection, a leading news agency reported. However, the rules are written in such a way that they appear to be literal facts. “It is very difficult to explain this to the students. If the students ask questions and look for evidence, how do we do that?” a teacher asked.

This is not the first time that the Karnataka textbook revision has come under fire from a review led by Rohith Chakratirtha. Opposition parties in the state have rejected the exercise, claiming it was an attempt to “safronize” the school textbooks.

Read also| Legend of Tipu Sultan and fight to keep him in textbooks, learn in #ClassesWithNews18

Previously, the textbook revision had come under fire for removing lessons on Tipu Sultan. However, the state’s school education minister, BC Nagesh, later clarified that the chapter on the Mysuru ruler will remain part of the curriculum and only “inappropriate” parts will be removed. While the state government dropped a chapter of son Tipu Sultan in July 2020 as a measure to cut 30 percent of the curriculum in the wake of the COVID-19 pandemic.