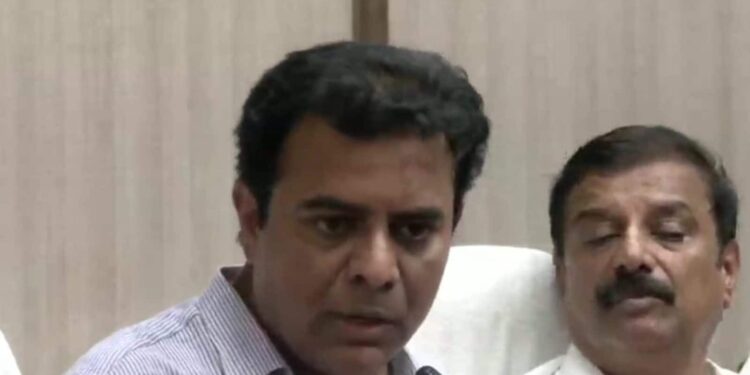 Telangana’s government has denied that some students of Rajiv Gandhi University of Knowledge and Technology (RGUKT) Basara were detained and not allowed to meet state minister KT Rama Rao during his visit to the institute on Monday.

An official said some vested interests seem to be spreading rumors about the minister’s interaction with the students.

Minister of Industry and Information Technology KT Rama Rao together with Minister of Education P. Sabitha Indra Reddy and two other Ministers A. Indrakaran Reddy and V. Srinivas Goud visited the campus of RGUKT, also known as IIIT in Basara in Nirmal district. The campus recently witnessed a series of student protests demanding improvements in basic amenities.

KTR, as Rama Rao is popularly known, communicated with students to know their problems and promised to address them. He also had lunch with students and assured them that campus amenities would improve soon.

Director, Digital Media, Government of Telangana, Dileep Konatham, tweeted that some vested interests appear to have been disrupted by rousing reception and love and affection shown by RGUKT students trying to spread factually misinformation.

He responded to media reports that 800 students were locked up during KTR’s visit and were not allowed to meet him.

He pointed out that RGUKT has a total student body of nearly 8,000 students, while Monday’s meeting took place in an on-campus auditorium, with a capacity of approximately 1800-2000.

He said that to ensure that other students also have the opportunity to listen to ministers’ speeches, screens had been set up in the adjacent hall. After the meeting ended, KTR also entered this adjacent hall and spoke to students there.

He wrote that dozens of students took selfies with the minister as well as students who were actively involved in the recent agitation. Not a single student was locked up or detained by anyone, he added.

KTR addressed the students and made five announcements in addition to the continuous improvement works at the university.

He stated that he and the Minister of Education will visit the campus again in November to hand out laptops to students.

He requested sports minister Srinivas Goud to build a mini stadium with Rs 3 crore, which was to come in six to eight months.

A state-of-the-art digital lab with 1,000 computers, 50 additional model rooms and an innovation lab are his other announcements.

To encourage the spirit of entrepreneurship, he requested RGUKT Vice-Chancellor V. Venkata Ramana to establish an innovation lab and hold one-week innovation celebrations every year.

He told the students that the problems at the university are being tackled one after the other and that the quality of the facilities is guaranteed.

KTR said the response was unsatisfactory for the bids for a mess contract and a genuine effort was made to get a good contractor.

He appreciated the students for protesting peacefully, not allowing politicians to interfere, and for forming a student council to solve problems on their own.

Prior to his speech, the minister of KTR had lunch with students and talked to them about their ambitions and other topics.

Based on his interaction, he requested the education minister to introduce new age courses in the university. The students have asked for futuristic courses such as artificial intelligence, machine learning, space technology and others to achieve high positions.