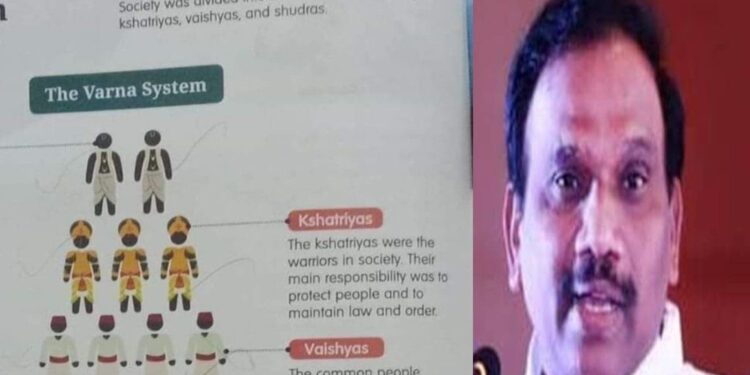 In a tweet, VCK leader Thirumavalavan wrote: “I brought it up to draw the attention of individuals who may be wondering where Manu Dharma or Varnashrama Dharma are,” he was quoted as saying. Moreover, he mentioned that the BJP government teaches Varnashrama Dharma to school children and that it is illustrated in the CBSE 6th grade textbook.

Then the VCK leader quoted that Hindus only exist in four different subgroups. The groups Scheduled Caste and Scheduled Tribe (SC&ST) are not included in these four categories, he added.

He tweeted this in response to the ongoing controversy over ‘Many Dharma’. The controversy started when, A Raja, a senior leader in the MK Stalin-led DMK government, said Manu Shastra defines Shudras as “children of prostitutes”.

The DMK MP made the controversial remark this month during a speech in Namakkal in Tamil Nadu.

The BJP reacted angrily to Raja’s comments, accusing him of appeasement policies by targeting a certain group of people. The BJP claimed that ‘although Manu Dharma is not practiced, A Raja has harmed the Hindus by talking about it unnecessarily’. Some critics have noted that caste no longer matters and the varna system is no longer practiced.

Over time, another controversy has been sparked by DMK senior leader A Raja when he stood firm on his commentary and recently remarked on Hinduism.

Despite the fact that A Raja is one of the leading politicians of the DMK, the group did not come forward to defend A Raja’s comments about Hinduism. Even Naam Thamizhar Katchi (NTK) leader, Seeman, and activists from the Periyarist organization came out strongly in favor of the politician, despite Raja’s failure to win over his own supporters.

Furthermore, the BJP called for a number of protests, but the BJP president of Tamil Nadu, K Annamalai, announced on September 21 that his party would instead organize a statewide signature campaign to collect signatures from people who say that they don’t want a MP like An Raja instead of protesting the DMK leader.

Amid the ongoing controversy over Hinduism that led to a major battle between the DMK and the BJP in Tamil Nadu, the chapter on the Varna system in the CBSE sixth grade textbook has started a new row.

Meanwhile, on September 21, a BJP official was detained in Coimbatore for allegedly threatening DMK’s A Raja. Balaji Uthamaramasamy, the district chairman of the BJP in Coimbatore, is said to have threatened A Raja during a lecture in September for his comments about Sanatan Dharma and challenge him to enter the city of Coimbatore.

According to a complaint filed by Thanthai Periyar Dravidar Kazhagam at Peelamedu Police Station in Coimbatore, the BJP politician is accused of discrediting A Raja of the DMK Chief Minister MK Stalin and Thanthai Periyar, the founder of the Dravidian movement. Balaji Uthamaramasamy was called to Peelamedu Police Station for questioning based on the complaint and after the investigation, the police made an arrest.