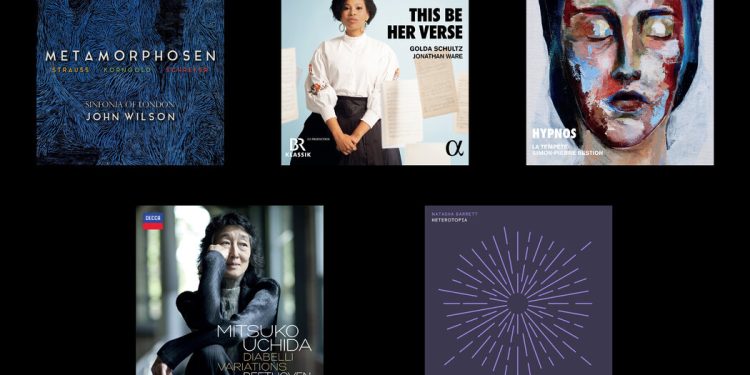 Slowly, slowly, Mitsuko adds Uchida to her Beethoven discography – these ‘Diabelli’ variations now join her five sonatas and two overviews of the piano concertos, with Kurt Sanderling and Simon Rattle.

Her latest is worth the wait.

There are pianists who will tell you that the “Diabellis” must be funny, playing them as if they were small – a diversionary manoeuvre. Not Uchida. She renders each of Beethoven’s 33 transformations of the title theme with the exacting precision she brought to Schoenberg and Webern. Listen to the second variation and how her fingers seem to have jumped off the keys before they were even pressed; or to the ease of the waxing figures of the eighth, scarcely far from Debussy; or the telling way she pronounces the chords in the 20th and 28th. Some variations even take on the intensity and drama of minor sonatas; how extreme she makes the contrasts of the 13th, and how inevitable her resolution of them feels.

Uchida never leaves you in doubt that this is a late work, with glimpses of the sublime – truly fitting from this most sublime pianist. DAVID ALLEN

‘This is her verse’

Nearly five years ago, in her Metropolitan Opera debut, soprano Golda Schultz had a tone that was alternately light and lush, showing signs of promise that have since been confirmed with painful optimism in “Porgy and Bess”; playful appearance in show tunes; flowing elegance in “Der Freischütz”; and more.

Schultz makes good use of her gifts. After building a career in a male-dominated canon, she only programs works by women on this album, recorded with pianist Jonathan Ware. Sometimes in the shadow of men: Clara Schumann, for example, who largely stopped composing after she married Robert Schumann, and who has here a setting of “Liebst du um Schönheit” which is less well known than Mahler’s in “Rückert-Lieder ”. A similar story follows Emilie Mayer, a romantic whose “Erlkönig” is obscure compared to Schubert’s.

Such programming offers a shift in perspective. Clara Schumann writes with a sweetness that Mahler underlines with a fearful darkness; Mayer’s “Erlkönig” is full of drama, but with more form than Schubert’s hellfire. Ware brings a theatrical sensibility to that song, befitting Schultz’s ease as an art song narrator, as in Rebecca Clarke’s “The Seal Man”.

Schultz isn’t always so comfortable, with a laborious lower reach in Schumann’s “Am Strande”. But at her best she sings with gleaming delicacy – soaring in Nadia Boulanger’s “Prière” and interpreted in Clarke’s “Down by the Salley Gardens” – and operatic urgency. Of course, Kathleen Tagg’s “This be her couple” fits best, a program order that, in addition to plucked piano strings, calls for soaring, ethereal high notes and carefree charm. JOSHUA BARONE

The title of this dreamy album evokes the Greek personification of sleep, and its lavish repertoire, stretching from the Middle Ages to the late 20th century, does indeed approach the narcotic. But while I expected the track listing to contain more explicit references to slumber — such as the “sommeils,” or sleep scenes, which French Baroque borrowed from earlier Venetian operas — the recording’s content, heavy on requiems and elegies, draws more from Hypnos’ twin brother, Thanatos, the embodiment of death.

That blurring of nocturne and eulogy is intentional: Simon-Pierre Bestion, who founded the ensemble La Tempête in 2015 and leads it in remarkably creative programs, is here in search of a (yes) hypnotic homogeneity, a night that feels as endless as the grave. With soft undertones of only cornet and bass clarinet, the 10 singers are ritually transported as they glide through works by Pierre de Manchicourt, Ludwig Senfl, Pedro de Escobar, Marbrianus de Orto, Antoine de Févin and Juan de Anchieta. There’s also Heinrich Isaac’s “Quis dabit capiti meo aquam”, a spectacular highlight; languorous chants from medieval Rome and Milan; and haunting modern pieces by Olivier Greif (from his Requiem, with the eerie quote from the lullaby “Hush, Little Baby”), Giacinto Scelsi, Marcel Pérès and John Tavener, all at home in this stunning setting. ZACHARY WOOLFE

It’s easy to get caught up in technicalities when talking about Natasha Barrett’s work. She uses ambisonics to compose and mix music in 3D formats. Some of her live performances — such as at the Experimental Media and Performing Arts Center (EMPAC) in Troy, NY — use dozens of speakers arranged around an audience in a precise dome that could intimidate an IMAX theater’s sound system.

But what good is all that at home? Not much, Barrett has realized. While some of her releases use binaural mixes – in an effort to make that immersive, spatial sound work over headphones – she’s also game to produce a more quintessential mix of her work. Such is the case with ‘Heterotopia’, the title track of which is a reference to Foucault’s idea of ​​being different. You don’t need a complex setup to get into it; just fire up your best speakers and hit play.

The nine-minute “Urban Melt in Park Palais Meran” begins as a field recording of a casual outdoor table tennis match. But within the first few minutes, you can feel the plink-plonking notes entering a sonic multiverse – splitting apart, doubling down, with different iterations of the game running over each other. This works well in a room with dozens of speakers, such as EMPAC. But Barrett’s overall take on the piece—where the audio-documentary feel gives way to passages littered with resonant drones and whipping, high-pitched sounds—also makes for riveting drama when heard in stereo. SETH COLTER WALLS

What a beautiful and stimulating recording this is. The Sinfonia of London is a session ensemble of eminent players who record and perform under the direction of John Wilson, a brilliantly talented Englishman who sees no good reason to stick with concert music; he became known for playing Broadway classics and old film scores. And if the name of his orchestra sounds familiar, that’s possible too. It had been used since the 1950s and was the title of the ensemble that played on John Barbirolli’s 1963 record of string music by Elgar and Vaughan Williams. And perhaps no one since Barbirolli has been able to make strings sing like Wilson; Schreker’s “Intermezzo” here has a sheen that’s intensely delicate one minute and impossibly luscious the next.

The rest of this recording offers varied responses to the place of tradition at the end of World War II, questioning the fate of precisely the kind of late-romantic music Wilson cherishes. Strauss’ Metamorphosen has rarely had such a painfully drawn-out, lovingly polished performance as this one. Even more beautiful is the rarity that accompanies it: Korngold’s Symphonic Serenade, a distorted, labored memory of all that poignantly easygoing light music in the Austrian tradition, written when he returned from Hollywood to Vienna. The silence Wilson finds before his slow movement is indescribably terrifying. DAVID ALLEN