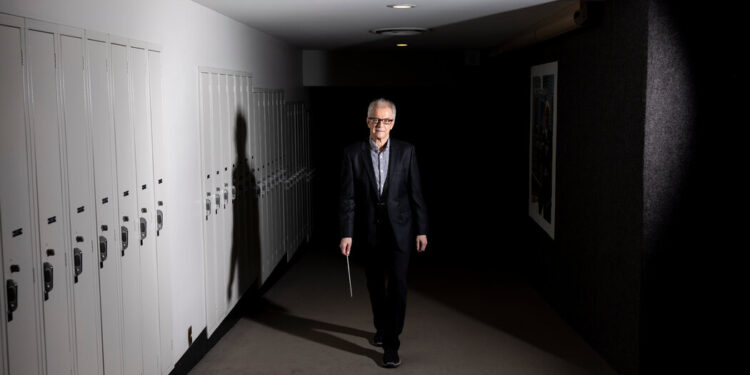 MINNEAPOLIS — Osmo Vänskä has said goodbye to the Minnesota Orchestra before. But this time it’s real.

In October 2013, at the nadir of one of the darkest periods a major American orchestra has ever experienced, Vänskä resigned in protest at a lockout that took away this ensemble, which he had drilled to perfection for a decade. — and nearly destroy — as its music director.

A few days later, he paved the way for conductors to openly side with their players during labor disputes, and conducted three concerts with the orchestra’s musicians, whose management had banned them from their own hall. Vänskä asked the adoring spectators to hold back their ovations after his encore of Sibelius’ “Valse Triste”, a dance with death which he led in anger. He left in silence and to tears.

Eight seasons later, tears at his departure will be due to his triumph.

The Minnesota Orchestra stands proud again. That exclusion ended shortly after Vänskä’s angry resignation, and he returned in April 2014, as if by acclamation. After 19 years as conductor of the ensemble, he will say goodbye to Mahler’s symphony no. 8 here on Sunday in the Orchestra Hall.

“I don’t want to say that this is a happy family, because there is no happy family in the world,” 69-year-old Vänskä said jokingly during an interview last week. “But it’s as happy as can be.”

His departure is a moment to take stock of why his tenure, one of the most tumultuous in the history of American orchestras, has been so important.

Born and educated in Finland, Vänskä, a dynamic stage host, arrived in Minneapolis in 2003 and declared that he would make the Minnesotans “the best orchestra in this country in four or five years.” He pursued that ambition with an intensity that he now admits was too aggressively intolerant of rehearsal imperfections. But there was a time about a decade ago when critics usually hailed the ensemble as one of the greatest in the country — or anywhere for that matter — for its willingness to take risks, its rhythmic verve, its sharp articulation, and its unanimity of purpose.

Ask Vänskä — who led the orchestra on a diplomatic mission to Cuba in 2015 and a groundbreaking tour to South Africa in 2018 — what he’s most proud of, and praises the musicians for always playing, he said, as if their work is about “Getting More Than a Salary.”

Consult the recorded legacy he left with the BIS label, one at least as great as that of predecessors including Dimitri Mitropoulos and Antal Dorati, and it would be hard to disagree. If Vänskä’s Mahler cycle failed in symphonies that require more extroversion than reserve, it also contains a tenth that is among the most convincing. His Sibelius remains admired, richer than his tight, biting earlier set with the Lahti Symphony. His captivating Beethoven still sounds as fresh as when it first came out, and is perhaps the finest overview of this century to date.

These are important achievements, but Vänskä’s time in charge was about more than the pursuit of musical excellence. There was ample evidence of this, however, in a concert here on June 2 that concluded with the premiere of his friend Jaakko Kuusisto’s symphony—a relentless, haunting reflection on mortality left unfinished by Kuusisto’s death in February from a brain tumor and completed by his brother Pekka.

Now, after a lockout and pandemic lockdown, it seems more important than national or international acclaim that the ensemble is trying to be the best for this city, which Vänskä – featuring Erin Keefe, his wife of seven and the orchestra’s concertmaster. – will keep calling home.

“We are stronger when a crisis comes when we are connected to this community,” he said. “We have to be there for this community, and then they will take care of us.”

Being there requires first of all that the Minnesota Orchestra continues to exist, a necessity that was once not as obvious as it should have been.

While the ensemble’s underlying finances have improved since the lockout, chief executive Michelle Miller Burns said, it still faces the sobering constraints many orchestras face. Even before pandemic restrictions devastated the revenues of the past two years, the balanced budgets that had steadily built confidence after 2014 had caved to a record deficit of $8.8 million in 2019 — a reminder of grimmer times.

The spirit and structures of transparency, consultation and collaboration that emerged from the lockout served the orchestra then and during the pandemic. In September 2020, the musicians voluntarily accepted a temporary 25 percent pay cut to get their finances in order, and no full-time administrative staff were laid off. Vänskä chose to waive 35 percent of his salary.

Despite the pain, no major problems are expected in the upcoming negotiations over the musicians’ contract, which expires in August. The financial plan remains to try to increase revenue, rather than impose budget cuts.

“Every decision we make, we make together,” said Sam Bergman, viola player and chairman of the orchestra committee. “There’s a greater level of trust than there would be if it were just decisions that were given from above.”

Much of that collaborative impulse came from the musicians, as well as Burns and her predecessor, Kevin Smith, but Bergman said Vänskä had also played a leading role in fostering a healthy culture at the orchestra, not least in an artistic planning process. involving musicians more meaningfully, such as in auditions and repertoire choices.

“If you have musicians and an administration that want a collaborative model, a music director who is threatened too easily can be a huge barrier,” Bergman said. “He’s embraced the idea that the musicians need to take a little bit of responsibility for the organization and lead the way we interact with the community. And he didn’t have to.”

This is especially true of the players’ efforts to tackle racism in classical music and beyond. Their work predates the murder of George Floyd here in May 2020, Bergman said, but has since intensified. The issue hit even closer to home in February, when Minneapolis police officers shot dead Amir Locke at an apartment across the street from the stage door.

Concerts featuring Joel Thompson’s “The Seven Last Words of the Unarmed” in May featured an exhibition in conjunction with the George Floyd Global Memorial; after Locke’s name was sprayed on Orchestra Hall during protests, the administration invited teenage artists to commemorate him more formally.

Among other initiatives, the orchestra has also initiated a musician-led project to record works by black composers, including Margaret Bonds and Ulysses Kay, who have not received professional recordings. And it continues to work with the Sphinx organization, whose three affiliates held positions in the strings for a year this season, and whose Virtuoso Ensemble shared the stage last week.

All this is intended as a start, but one that goes beyond the symbolic efforts of many other orchestras. Laurie Greeno, former co-chair of Orchestrate Excellence — one of the two main community groups that emerged during the lockout — and later joined the board of directors, said the board was keen to diversify a roster that remains 84 percent white.

“If you just look at demographics in 30 years,” Greeno said, “this organization won’t exist if it’s not relevant.”

For its part, Vänskä has embraced this agenda when planning past seasons; Minnesota subscription programs now routinely include at least one work by a composer of color.

“We can’t say this is our style, and we just play this and that,” he said of the inherited canon, emphasizing that elevating underrepresented composers doesn’t mean compromising on quality or taking a blockbuster risk. “No. We have to change.”

Vänskä’s mix of musical talent and steadfast local commitment will make him hard to replace. He will serve as conductor-laureate, but the organization is in no rush to confirm his successor, four years after he announced his departure.

“Someone who is really going to embrace what and who this orchestra is is really important,” Burns said of the search committee’s priorities. “I think that’s well shown by how engaged and active our next conductor is in this community.”

The selection for next season offers few clues. Fabien Gabel and Dima Slobodeniouk have been mentioned in rapidly changing candidate lists in the local press. Otherwise, there’s a mix of experienced hands like Donald Runnicles, midcareer maestros like Thomas Sondergard and Pablo Heras-Casado, and younger opportunities including Dalia Stasevska and Ryan Bancroft, a Californian who at age 32 was recently announced as chief conductor of the Royal Stockholm Philharmonic Orchestra.

Vänskä has no immediate plans to take another orchestra to the heights he insists on. His brief flirtation as music director of the troubled Seoul Philharmonic Orchestra is ending this year, and he’s in no rush to find a new long-term job.

“The orchestra has to be ready to work hard,” he said of any musical directorship possible. “There are orchestras that don’t want to work, and we soon start hating each other. The great thing is that it is not a must for me to get a new job. I can guest conduct until the end.”

He continued: “That’s all I can do, make music. If I stopped now, I would be going crazy in a month.”