At the Grammys, the young succeed most when they look old 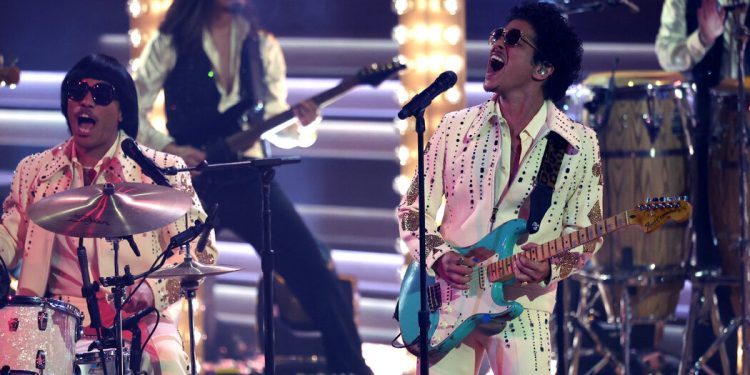 That’s the chicken-and-egg riddle that spoils prices, and so does the pop music industry, which coexist in an uneasy alliance, squinting as they secretly held hands. At the Grammys, maturity is rewarded and often demanded, putting it at odds with a music company that continues to value youth.

At the 64th Annual Grammy Awards, held Sunday night in Las Vegas, these tensions were manifested in countless ways. Take Justin Bieber, who started his performance of the glittering, sneaky “Peaches” sitting at the piano, singing seriously and with pulp. For 28-year-old Bieber, who is generally not considered a musician, it was a quirky trick, or perhaps a plea.

Bruno Mars and Anderson .Paak — performing as Silk Sonic — won both song and record of the year for “Leave the Door Open,” a stunningly smooth 70s-style piece of soul. aesthetics of yesteryear nailed down, from suits to hairstyles to mannerisms. Both men, master purveyors of retrosonic ideology, are 36.

Jon Batiste, the New Orleans jazz scion and late-night bandleader who won album of the year, delivered a performance that channeled second-line funk, classic soul, and a hint of hip-hop. He’s 35.

These are the kind of performances and artists the Grammys crave: appearing young but embodying the old-fashioned values ​​of musicality. Because the broadcast of the Grammys draws in generations of viewers, and because Grammy voters are drawn from a broad pool of aging, which shows up in the show and in the awards themselves is a kind of pitiful compromise that keeps real innovation at bay. The nominees in the top categories were refreshingly democratic in genre and age, but Batiste and Silk Sonic outperformed them all.

That meant the only one left for Olivia Rodrigo, nominated in all four, was Best New Artist, which she did. Rodrigo was the clear breakout star last year, and the excellent placement she received on the broadcast, with one of the first performances, indicated that the Grammys understood her strength. A shock of uncircumcised childhood, she performed “Drivers License” with a light eau de grunge and later thanked her parents for accepting the award for best vocal pop album for “Sour”.

But that was kind of fake, as were most of the show’s opening sequences, including precocious Grammy favorite Billie Eilish, K-pop group BTS, reggaeton star J Balvin, and Lil Nas X, whose mix of Raunch and humor felt pressed himself a bit during his medley of recent hits. The only other time the show approached a moment of honest freshness was when Doja Cat rushed to the stage to receive her Best Pop Duo/Group Performance Award after leaving the room for a bathroom break. She and her co-winner SZA giggled at the snafu, and Doja spoke in the unfiltered way she’s become known for, which felt fresh in this context: [expletive]but this is a big problem.”

As for some other young stars, they refused to show up – Tyler, the Creator, who won best rap album; Drake, who withdrew from the categories in which he was nominated; the Weeknd, who has declared after last year’s no-nomination debacle that he will never submit his music for consideration by the Grammys again; Cardi B, only nominated once. (Taylor Swift wasn’t there either, but that absence had less of an air of protest than an admission that probably wouldn’t bring trophies this year.)

That lineup of no-shows could fuel an alternative awards show or concert (as suggested by hip-hop mogul J. Prince). And therein lies the Achilles heel of the Grammys: It needs artists like these, both for pertinent reasons and as a tribute. As hip-hop has become the dominant sound of pop music, its stars will become tomorrow’s elders. If the Grammys continue to alienate its young titans, his attempts to honor the music that moves forward will consistently fail. (That was emphasized by the oldest performer on this year’s show: Nas, 48, who spent half of his set performing 20-year-old songs that long ago earned a Grammy podium.)

This gap — between the Grammys and the youth, between the Grammys and hip-hop — means the show has to double down on younger stars who are willing (and excited?) to engage in dialogue with the sounds of yesteryear. Some of the night’s most notably mature vocals were from Rachel Zegler, who sang Sondheim as part of the in memoriam segment. One of the show’s most rousing moments came from R&B singer-songwriter HER, who may have been over-indexed with acclaim at awards shows in recent years. Her performance, alongside Lenny Kravitz, Travis Barker and Jimmy Jam and Terry Lewis, connected her with three generations of funk and rock.

And then there’s Lady Gaga, the one-time pop disrupter who has become the epitome of the institutional legacy through her ongoing work with crooner Tony Bennett. Their latest album, Love for Sale, won Best Traditional Vocal Pop Album, and Gaga paid tribute to Bennett, 95 – who was not present – ​​and sang two of the album’s songs, which originated in the 1930s. . Her vocals were sharp and invested, advocating decades-old standards on a contemporary pop stage, embodying the multi-generational goals of the Grammys.

It was easy to lose sight of the fact that Lady Gaga is only 36. And looking at the next generation of pop talent — Eilish, Rodrigo, Doja Cat, Tyler, the Creator, and beyond — it’s hard not to wonder how long they’ll be allowed to be young before the Grammys insist they grow up. .