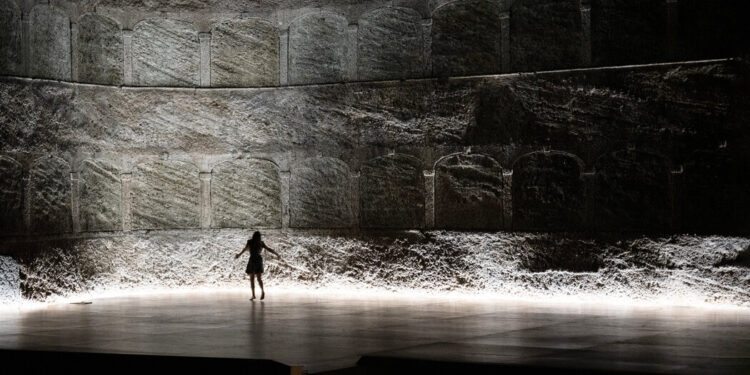 It was hard to blame her for crying. “Kat’a” is a breathless tragedy about a small-town woman trapped in a loveless marriage and driven to suicide after a brief affair. Janacek’s music expresses her ethereal fantasies with the brutal fist of reality.

Barrie Kosky’s staging was the highlight of a week in Salzburg, the annual event of choice for classical music, which runs until August 31. Kosky has reduced this sober work even further, to the core of trembling people.

The only set consists of rows of eerily realistic models of people, standing, dressed in plain clothes and turned away from us – and away from Kat’a and her pain. (I admit, I was fooled into thinking that these were many dozen very silent extras.) Behind them loom the stone walls of the Felsenreitschule theatre, whose enormous stage seldom seemed larger or more lonely than when the soprano Corinne Winters raced over it, running with nowhere to go.

Nervous and balletic, ecstatic and anxious, Winters has the fleeting presence of a child, and her live wire voice conveys Kat’a’s wonder and vulnerability. She is the centerpiece of the production, but the entire cast is powerful; Winters’ interaction with Jarmila Balazova’s quirky Varvara makes years of friendship between the characters easy to believe. Conductor Jakub Hrusa confidently plays the work as a bitter, pauseless single shot, even if the Vienna Philharmonic – the festival’s longtime house band – sounded a bit thin and unsure in what should be a heated unanimity.

There is a sort of familial resemblance between Kat’a and Suor Angelica, the anguished young nun in the middle of one of Puccini’s three one-act plays in “Il Trittico”, here directed by Christof Loy, with the Philharmonic conducted with sensual lightness by Franz Welser- Must. Like Winters, the soprano Asmik Grigorian, who stars in all three acts, is an intense actress with a voice of chilling immediacy. (This is the vocal flavor right now in Salzburg; the days when Anna Netrebko’s plush tone reigned here seem to be over.)

Sparse but detailed, united by an airy buff color space with shifting walls, Loy’s staging rearranges the triptych, starting rather than ending with the “Gianni Schicchi” comic, which now precedes the stark adultery tale “Il Tabarro,” starring Roman Burdenko as a strong Michele.

“Suor Angelica”, the closer, is the reason to see this “Trittico”; it’s the only one of the three roles in which Grigorian’s lack of tonal warmth plays to her full advantage. Her confrontation with the experienced soprano Karita Mattila – not an alto, as the role of Angelica’s aunt really requires, but quite imperious – is a blazing confrontation of dueling pains. And the closing scene of Grigorian, milking out the unexpected poignancy of her simply changing for us from her habit of a sleek black cocktail dress and letting her hair down, is just as heartbreaking.

A woman is also on the verge of collapse, but much more amusingly, in Rossini’s ‘The Hairdresser of Seville’. With star mezzo-soprano Cecilia Bartoli running the spring Whitsun festival here, there’s a production vehicle for her every summer. But there was a chuckle when it was announced that Bartoli, aged 56, was planning to play Rosina, usually sung at the start of his career. (Bartoli made her professional stage debut in the role 35 years ago.)

But her voice – and her lightning-fast coloratura – are remarkably well preserved and her enthusiasm is irresistible. Directed by Rolando Villazón, the show is a love letter to the movies, such as “The Purple Rose of Cairo,” in which characters walk on and off the screen. Here the silent era comes alive, with Bartoli as the diva whose experience is winked in an overview of her photographs, from Joan of Arc to pirates, projected during the overture. But the concept isn’t kept so strict as to detract from the adorably crazy fun.

The Les Musiciens du Prince-Monaco ensemble plays with a silky spirit for Gianluca Capuano, who leads a cast as easygoing as Bartoli – including Alessandro Corbelli, Nicola Alaimo and, as a Nosferatu-esque Basilio, Ildebrando D’ Arcangelo. And the existence of a rarely performed mezzo version of the climactic aria “Cessa di più resistere” allows Bartoli to alternate verses with the agile young tenor Edgardo Rocha.

The other opera at the relatively intimate Haus für Mozart this summer also takes a hint from the movies: Mozart’s “The Magic Flute,” framed by director Lydia Steier like “The Princess Bride,” with a grandfather telling the story to a young child. – here, three guys. As when this staging was new, in 2018, this is a clever way to super-compress the work’s extensive spoken dialogue.

Four years ago, the production was sprawled in the festival’s largest theater; now it is smothered in its smallest. Steier has wisely tossed a slew of steampunk circus images overboard and concentrated more on the plot as a parable of the start of World War I, with “Little Nemo” accents. It’s subtle work, as the boys gradually become participants in the action, not just spectators. The Philharmonic played under Joana Mallwitz with an ideal mix of crispness and roundness.

Not every Salzburg Festival includes a revival of a show from the past; this year there are two. In 2017, the staging of Verdi’s “Aida” by Iranian-born photographer and video artist Shirin Neshat was that summer’s highly anticipated offering, a rare full-length production directed by Verdian giant Riccardo Muti, and Netrebko’s debut in the title role.

Previously in the background was Neshat, her first time doing opera — and a pristine, dull attempt. Now, with less acclaimed collaborators, her work has come to the fore, still decent but deeper. To have a poetic effect, some of her blurry, languid early videos of slow-moving crowds on the streets and coasts of the Middle East have been added; her photos now also feature, and some of the dancers are covered in Arabic calligraphy, a trademark of her art.

There are some good ideas, such as the ominous, violent depictions of the ballet in Amneris’ room and the Triumphal scene. Also some bad ones: Amonasro, Aida’s father, there seems to be a ghost here, already dead, at the beginning of Act III, which makes the plot incomprehensible. Alain Altinoglu’s conducting of the Philharmonic Orchestra has a sensible tempo, but compared to the beautiful colors and textures Muti produced, it was otherwise ordinary. (The nighttime beginning of the Nile scene is one of many passages that is less evocative this year than it was in 2017.)

Elena Stikhina’s gentle Aida and Ève-Maud Hubeaux’ dignified Amneris were impressive, but Piotr Beczala, a radiant Radamès, was the only truly glamorous singer. And glamour, like it or not, is an essential part of the ideal Salzburg experience: an extravagance of imagination and performance beyond what you can get at the Met or the Vienna State Opera.

There was grumbling among Salzburg viewers about the two revivals and the not-quite-new “Barber,” which premiered in June. A budget of nearly $70 million for just three really new stagings?

This was clearly a warning as the pandemic continues. “I am convinced that it is the right choice artistically and economically,” said Markus Hinterhäuser, the festival’s artistic director, when the season was announced last year.

But the economic part seems more true than the artistic part. “Flute” and “Aida” were improved – the Mozart was tighter, the Verdi more nuanced. The question is whether opera’s most famous and richest summer festival required iterations of two repertory standards—works seen around the world during its regular season—in performances that, while solid, weren’t much more distinctive than what you’d step into a large House.

It’s a telling bit of a weakness, as Salzburg faces renewed competition, especially from France’s growing Aix-en-Provence Festival – and even from the Santa Fe Opera, which this year presented “Tristan und Isolde”, its first Wagner in decades, and a world premiere (“M. Butterfly”). For all its resources, Salzburg has recently given up major commissions to bring back undervalued modern works.

Aix and Salzburg went head-to-head this summer, both with productions by the much sought-after author Romeo Castellucci. It was a showdown that Salzburg lost. Aix was given an enormous, haunting staging of Mahler’s Second Symphony as the excavation of a mass grave. But here in Austria, as Joshua Barone wrote in The Times, Castellucci’s double bill of Bartok’s “Bluebeard’s Castle” and Orff’s “De Temporum Fine Comoedia” was a grim, murky slog, sloppily played by the Gustav Mahler Youth Orchestra conducted by Teodor Currentzis.

But even a growing Aix misses the scope of Salzburg’s concert programme, which begins with a lengthy Overture Spirituelle mini-festival and offers an enviable, overlapping array of often excellent orchestral programs and recitals.

Not all of the concerts were to my liking this year. The gentle touch of pianist Grigory Sokolov was enticing in Beethoven’s ‘Eroica’ Variations and Brahms’ Op. 117 pieces, but put Schumann’s “Kreisleriana” to slumber. Tenor Jonas Kaufmann’s voice rarely came to life in a recital whose halves had been dullly ripped from his two most recent albums.

But it was touching to watch superstar pianist Lang Lang show his respect for Daniel Barenboim by joining that conductor and the West-Eastern Divan Orchestra for Manuel de Falla’s “Nights in the Gardens of Spain,” not a virtuoso showpiece at all. . And while the Vienna Philharmonic, conducted by Andris Nelsons, muddled Bartok’s Piano Concerto No. 2 with Yefim Bronfman, the orchestra sounded opulently ripe in Mahler’s Fifth Symphony.

More memorable was a less lofty, less publicized concert: one of the festival’s Mozart matinees at 11 a.m. with the Mozarteum orchestra. These mornings often feature the festival’s most upbeat, lively play, and last week’s program was no exception, spearheaded by Adam Fischer.

The Mozart Matinees are well attended and received with great pleasure. But they still feel like a Salzburg secret.