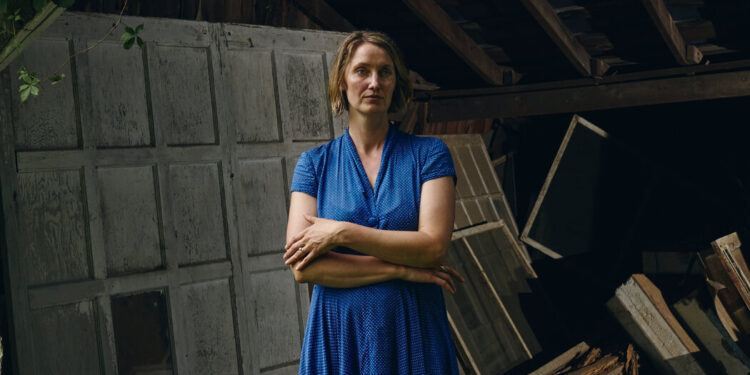 SKYLIGHT, Ky. – The second week of November 2016: Donald Trump was elected president and Leonard Cohen was dead. The songwriter Joan Shelley and the guitarist Nathan Salsburg — her collaborator for the better part of a decade and her boyfriend for the better part of a year — were the opening act of a tour that suddenly seemed pointless. They listened repeatedly to Cohen’s haunting farewell, “You Want It Darker,” and bickered over the news.

“It was so masochistic, ‘Start over, and let’s feel terrible,'” Shelley, now 36, recalled recently over the phone from Kentucky during one of the many interviews, laughing through a sigh. “Speaking of bad reverb, the worst echo box.”

But, Shelley recalled, as the sun sank west along the Indiana plains on that 2016 drive, she marveled at the outlines of homes scattered on the horizon, how they seemed to resist the drag of inevitable darkness. “It made a very nice point – the hope of someone building a house here, despite all …” she said, pausing for words that never came. “It was lonely, but it was resilient. Everything became part of the sunset.”

Three years later, Shelley was standing in the kitchen of their bungalow, playing her latest tune for Salsburg – “When the Light Is Dying,” a snapshot of that gloomy scene and a portrait of hope through shared perseverance. “Oh God, I felt emptied,” Salsburg, 43, recalled in a phone interview. “That was a desperate, desolate moment, but she turned it into something really beautiful, this whole cocktail of being human.”

The graceful song’s silent redemption is the centerpiece of ‘The Spur’, Shelley’s sixth solo album, due out Friday. Largely written during the pandemic while Shelley was pregnant with their daughter, Talya, the twelve songs are not about her expectations for motherhood, but instead her struggles as a daughter and sister, as an attentive observer of the cycles around her lifelong home. and her concerns about the future of the place, both politically and environmentally. There is death and renewal, romance and retreat, self-doubt and civic hope, all displayed with elegant restraint in her fireplace alto.

“I had to clean up this mess I had been carrying around,” Shelley said on another interview day. “I wasn’t sure if I wanted to be a mother, but this made it possible. I was afraid to hurt a new person, to continue the pain that was inflicted on me.”

Shelley and Salsburg live on a 40-acre former tree nursery 30 minutes northeast of Louisville, tucked at the end of a long driveway in the community of Skylight. She grew up on her mother’s nearby ranch for Saddlebred horses, a world apart from Louisville and “punk kids who looked so hard.”

Her parents separated when she was 3. After her mother remarried, Shelley struggled, silently and thoughtfully, for space between four other children. She began to mimic heartbreak songs from the radio, using the borrowed language of romance to explore adolescent anxiety. She won a songwriting competition at age 9 and then joined every choir she could find, rehearsals organizing trips to the big city. When high school started, she learned chords on a guitar that had been salvaged from the attic.

“I didn’t have a voice in that family, but I found one through music,” she said. “That’s 100 percent why I’m singing now. I was the only one in my family who had this expression, so I made a quiet corner in a noisy world in this very isolated family.”

Shelley went south to the University of Georgia, hoping that Athens’ storied music scene would motivate her if the courses didn’t. She studied anthropology and dreamed of archaeological excavations in exotic places. But after graduating, she fell into a small traditional music crew in Louisville, where she started the longtime trio Maiden Radio along with two music therapists, Cheyenne Marie Mize and Julia Purcell.

“We didn’t want to go around the world playing as ‘Kentucky’s Appalachian band,’ because that’s not who we were,” said Mize, who continued to sing with Shelley until dawn when they met while camping in the Red River Gorge in the United States. state. “Joan wrote in an old-fashioned style as an exercise; she started to find her style.”

Shelley has steadily refined that style—a braid of folk immediacy and poetic insight, much like the writing of fellow Kentuckian Wendell Berry—over a decade or so. The tree sanctuary has become another quiet corner, allowing her to “shine in solitude” to raise chickens and goats, grow kale and collard greens, bake sourdough bread, and write songs alone at the kitchen table. (If Salsburg comes in for a snack but finds her with a guitar, he disappears; she doesn’t play him songs until they’re done.)

Birds, rivers, leaves and ridges enliven her writing; images wrested from its surroundings offer unexpected lenses for self-reflection. “There’s no facade here that’s useful,” Shelley said of farm life. “This privacy is a way of letting go of the things you’ve said and trying to say something else.”

However, to write “The Spur,” Shelley opened up her usually hermetic process. She joined a new group of local songwriters who met weekly to share their responses to a prompt. The time constraints inspired her to be content with pieces she would once have considered unfinished, such as “Fawn,” a playful yet candid ode to protecting privacy. “I’ve been worried since the beginning,” she sings, softly but firmly. “Am I safe in my own skin?”

And when she stopped with a tune that reflected all the birth, life, and death she’d seen as a country kid, she emailed the sketch to Bill Callahan, a singer-songwriter she’s long admired. They have become pen pals in recent years and have only met once. “She writes songs that don’t feel like they’re trying to do something,” Callahan said over the phone from Austin. “You never know for sure whether the tide is going in or out.”

Knowing about her rural conditions, he provided images of cows being killed for hides or crops planted for harvest on ‘Amberlit Morning’, its signature baritone, the doomy inverse of her tender awakening. “When I was a child, I didn’t see the tragedy of a dying foal. ‘A snake ate the ducks’—that’s exactly what happened,’ said Shelley. “It wasn’t until later that I learned to cry about the loss or the ugliness or the violence.”

As new parents, now a year married, Shelley and Salsburg talk about leaving the ranch or even Kentucky, about finding a place where their elected officials reflect their values. “We have a community rich in great people, but is that enough to isolate Talya from the treacherous stuff?” Salsburg asked, squinting into the sunlight outside the shed where he works remotely as the curator of the Alan Lomax archive. “For this child, we can use a different place, a different path.”

However, Shelley waddles with the seasons. The new song “Why Not Live Here” addresses the problems of coming home to challenging places. As she sauntered to Harrods Creek on the afternoon of a personal interview, her billowing pants swishing against the thick grass, she pointed to the culvert where she was reading and stood over the possum carcass, unfazed as she contemplated its end.

“Once all the trees were gone, I thought, ‘I am’ stay forever,” she said of the recent start of spring, singing those last few words in a soprano vibrato. “But it’s still hard to imagine planting a child in this.”

For now, the songwriting coterie that spawned much of “The Spur” has turned into the Marigold Collective, an upstart group that organizes letter-writing campaigns for conservative Kentucky politicians and a parade along an old bison trail to celebrate, as Shelley put it.” living on the brink of extinction.” These actions are small, she said, like writing new songs to heal old wounds, but they may prove more meaningful than submission to darkness.

“Music made me a whole person — it allowed the softer parts of me to survive,” she said during a FaceTime call, as she walked around the yard to birds chirping. “It’s a way to let go of everything.”