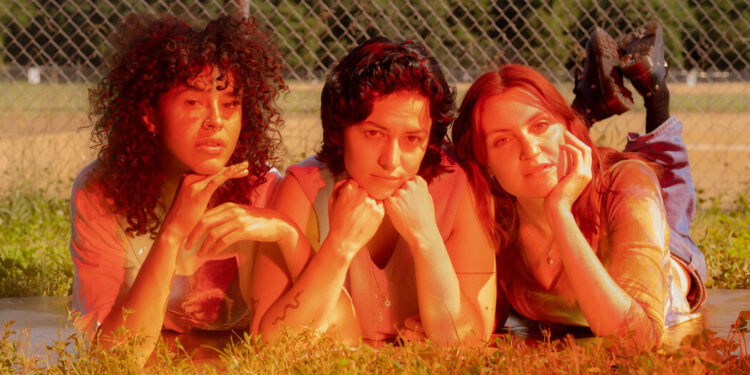 The members of Muna continued to call themselves “impenetrable.” They regretted it, they insisted, as they all jumped into the frame of a video call from a backyard in Los Angeles, ping pong indoors, and rearranged themselves into various configurations.

The indie pop trio of Katie Gavin, 29, Naomi McPherson, 29, and Josette Maskin, 28, operate at a frenetic frequency and have easy access to their emotions. By the end of the call to discuss their new album, due out Friday, the three of them were in tears and begging themselves out loud to stop crying. The constant wave of promotion was growing: “That’s why we’re chaos vibes,” McPherson said, dangling a strand of curly hair across the screen.

Every album release brings some chaos with it. But for Muna, sending his third, self-titled album into the world means starting all over again. The group played in Lollapalooza and appeared on Jimmy Fallon’s show before debut album ‘About U’ was released in 2017, then opened for Harry Styles and followed by a 2019 LP called ‘Saves the World’. But the label, RCA, dropped the band for months into the pandemic, citing cost savings.

Muna was devastated. Then it went back to work. A friend of a friend, someone the members knew through what Gavin called “the lesbian support group in Los Angeles,” rented them a studio in her basement for next to nothing, and the band showed up every day. The songs it worked on there were going to be the most pop-oriented and propulsive yet. One became something the band had never had before: a viral hit.

“Life is so much fun, life is so much fun,” Gavin sings on “Silk Chiffon,” which features Phoebe Bridgers and rides TikTok, soundtracked by tutorials on cookie dough, hangovers, and odes to lovers. The rest of “Muna” is filled with effervescent songs about twirling through gay bars and skating through the night barreling over smooth, sputtering synths. Buoyed by the success of “Silk Chiffon”, the band is now on the cusp of breaking out of its cult following and bringing its anthems about queer joy to a wider audience. But joy is not easy for Muna, neither in his music nor in the lives of its members.

“Obviously everything is going very well,” said McPherson, who is non-binary, as he poked their teeth with a toothpick. “That’s when the demon wants to punish you.”

Muna started out at the University of Southern California, where McPherson saw Gavin cycling through campus and muttered to their friend, “That girl is cool.” The feeling was mutual; they bonded and Gavin introduced McPherson to Maskin at a party. Almost immediately they started making music and practicing guitar chords in between lessons. Gavin sings lead vocals, plays guitar and helps with production; Maskin (guitar) and McPherson (guitar and keys) are working on the production.

Nearly ten years later, part of their songwriting process is the same: Muna knows when to stop. The band likes to put in what McPherson calls ‘princess work’; they tinker with songs for a few hours every day and stop just when a song starts to click into place. “You’re trying to keep the magic,” Maskin said.

The group spends the rest of the time hanging out – watching YouTube, doing bits. The easy intimacy, the way they finish each other’s sentences or communicate with an eyebrow raised, is central to their process. It also takes work. Gavin and McPherson had been dating for years, and when they broke up, Maskin threatened to leave the band if they didn’t go to therapy. (The trio has also gone to what they call “band therapy.”)

Recording can be stressful. “I’d only record all my vocals in a closet if I could,” said Gavin, after the band told them to repeat the song “Solid” five or six times because she continued to cherish the lyrics: “My baby is so solid ,” in a way that sounded like “My baby is a salad.” But Muna has learned to stir each other up and not overload the music.

“At some point you get song dysmorphia where you think, ‘I don’t know if this is going to sound right, guys,'” McPherson said.

“Muna” is a shift for the band, one step further into glitzy, shimmering pop. “At RCA we were like, ‘We’re going to be ourselves, we’re going to make interesting indie pop music, we’re not here to make hits,'” said McPherson. “And then, the moment we leave, we’re at an indie label and we think, ‘Here’s our poppy song ever.'”

The small label is Saddest Factory Records, which is run by Bridgers, the indie rock breakout star. The band calls her “Daddy” and she sings a dizzying verse about getting lost stoned through the aisles of CVS on “Silk Chiffon.”

Another indie powerhouse, Mitski, also left fingerprints on the album. She had first met the band at a festival. “We’ve just started chatting, which is rare for me because I’m very introverted and don’t just ‘start chatting’ with people,” Mitski wrote in an email. “It’s a testament to how friendly and kind they are.”

Mitski came to McPherson and Maskin’s apartment in Highland Park and made them tea while they listened to disco. (Their downstairs neighbor kept texting to be quiet.) “You have no idea/the things I think of you when you’re not around,” Gavin sings on “No Idea,” the gradually building track that emerged from that session. . “Mitski is the sexiest songwriter I know,” she said.

Like most tracks on the record, “No Idea” plays with the gap between perception and projection, the clarity and confinement that come with claiming a label. “She’s not a mirror you reflect in,” Gavin cooed over a thrash guitar on “Solid”. On Shania Twain’s slower, indebted “Kind of Girl,” she gets more explicit: “I’m a girl who learns that everything I say isn’t final,” Gavin sings.

The album fluctuates between dance floor anthems and lyrics about meditation, coruscating synths and a touch of twang. “The album is a bit disparate in sound, different in terms of what the songs say, but the connective tissue is self-definition and agency and identity and questioning those things,” McPherson said. “And also knowing that nothing is certain.”

Although the band’s circumstances have changed, Gavin won’t let go of his past. “I don’t want this era to be, ‘Oh, we used to be one way, and now we’re another way, and everything is great now,'” she said. “We are who we are, but it’s the compassion we have for ourselves, the consciousness we have.”

Earlier this month, the trio returned to “The Tonight Show,” and Gavin was feeling a bit of the panic she’d experienced when the band first played there in 2016. The band members spent the cab ride to the hotel after recording. their performance. They talked about the importance of doing the show, how Gavin felt, what they hoped the album could do for them, whether it could help them keep making music for as long as possible “and not have so much existential stress.” have as we have now,” said McPherson.

The driver finally agreed. “He said, ‘In my 20 years of driving, I’ve never heard people being so nice to each other,'” recalls Gavin. She and McPherson were wedged on a bed in their hotel, beaming at a laptop screen; Maskin was in her room in the hall packing and peeling a banana. “It just felt like the cheap thing where — it’s an achievement to do these big moments, but I think, like, the bigger thing —.” She paused. “I’m such a cheese ball.”

“Do it!” shouted McPherson.

Gavin rolled her eyes. “I think the greater achievement is to have these friendships with each other.”

All three fell silent for a moment. Then they giggled, weak and then furious.