Review: A new opera tells an original story with an open heart 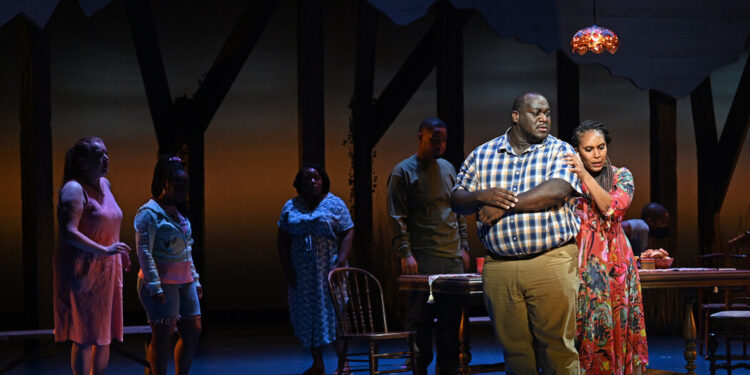 CINCINNATI — Brett Dean’s tumultuous adaptation of “Hamlet” played at the Metropolitan Opera two months ago, but it still rings true to my ears.

Almost literally: it is a loud, chaotic score, a collection of warring batteries of percussion and crowd-surrounding electronic effects, complex polyrhythms and virtuoso extended techniques. In all these qualities it stands for a large number of contemporary operas (some good, some bad) that are defined as overwhelming. They are hurricanes of shocking sound, anarchic and bewildering.

The music of Gregory Spears — whose sensitive “Castor and Patience” was commissioned by Cincinnati Opera and premiered here Thursday night — is the complete opposite.

Warm, steady, understated, safe tonally, the orchestras in his works tend to serenely repeat small-cell material, without extraneous instruments or strange use of conventional ones.

Spears’ style is so self-effacing that the gloomy drone at the beginning of this new piece emerges from the mood of the ensemble without pause, as if by accident. The overall effect is of a smoothly unrolling carpet – reminiscent of Philip Glass in his unhurried but heartbreaking harmonic progressions – on which voices soar.

And soar, and soar. The pains and pleasures of “Castor and Patience,” which runs through July 30 at the School for Creative and Performing Arts’ Corbett Theater, are like those of a less densely orchestrated Puccini. As in “Tosca”, “La Bohème” or “Madama Butterfly”, unashamed, even shamelessly exuberant vocal lines pull us poignantly close to characters in a tornado: here, a black family torn apart by disagreement over whether or not to sell a part. of a precious piece of land.

Precious, because bought with hard-won freedom. The action is set on an undisclosed island off the coast of the American South that was inhabited by former slaves after the Civil War. Among their descendants, Castor departed and moved north with his parents; his cousin, Patience, stayed with hers.

Decades later, both are adults with children of their own. It’s 2008 and Castor — like so many people in the years leading up to the Great Recession — has borrowed far more than he could. The only way he sees out of financial ruin is to return to the island and sell some of his inherited interest, probably to a white buyer who plans to build apartments by the sea; that is an outcome that the tradition-oriented solitaire cannot bear.

It is a battle between old ways and new, past and future, leaving and staying, under the watch of the spirits of ancestors and the abiding reverberation of their oppression. (“To live means to remember,” as one character sings.) This narrative ground is well-known—gentrification versus conservation, with echoes of “A Raisin in the Sun”—and it could have just been overwrought.

But Tracy K. Smith, the former Pulitzer Prize winner, has produced a libretto as unobtrusive as Spears’ score. An original story rather than one of the transformations of existing material that currently clog the opera world, her text is largely prose and never purple; modest arias arise naturally from the dialogue. Ignited by painful music – the orchestra of 38 is conducted with calm confidence by Kazem Abdullah – the result is passionate, but also clear, focused and humble.

Spears’ two most prominent earlier operas had both been accomplished. “Paul’s Case” (2013), based on a Willa Cather story about a restless, dandy-looking young man, had the stubbornly stylized formality of Stravinsky’s “The Rake’s Progress”. That neoclassical (even neo-medieval) feel was extended to the more naturalistic “Fellow Travelers” (2016), amid the anti-gay witch hunts of the McCarthy era. But the lyricism that was taut, almost unbearably amplified in “Paul’s Case” felt a bit repetitive and listless across the wider canvas that followed.

Six years in the making — and two years after the pandemic forced them to cancel its scheduled premiere, celebrating the Cincinnati Opera’s centenary — “Castor and Patience” is more intense and relaxed than either. ‘Paul’s Case’ was 80 minutes long, ‘Fellow Travelers’ an hour and 50. The new opera is over half an hour later, but it feels less long-winded than unhurried, unperturbed. You get to know the characters and sit with them.

The vitality of these figures is also due to a dedicated cast, led by the baritone Reginald Smith Jr., a haunted Castor, and the soprano Talise Trevigne, delicate yet powerful as the implacable Patience.

Mezzo-soprano Jennifer Johnson Cano sings with gentle force, bringing humanity and nuance to Castor’s wife, Celeste, who begins the opera and pressures him to sell, but ends in as tortured ambivalence as anyone else. Raven McMillon and especially Frederick Ballentine, snorts—convincing teenagers—as their daughter and son, Ruthie and Judah. Patience’s children, West (Benjamin Taylor) and Wilhelmina (Victoria Okafor), were kind yet touching guides to the satisfaction of island and family life.

Their outpourings are so fiery, the melodies so sweet that you can almost be moved to tears by more or less arbitrary lines – a feat that is both impressive and at times exaggerated, especially in the first act. But in the second act, the tension rising inexorably, resistance to a work so frank, tender and clear seems futile. If it’s emotionally manipulative – in the grand tradition of Aaron Copland, Leonard Bernstein and Carlisle Floyd – it skillfully is.

Vita Tzykun’s set extends the facade of a house across the podium, but leaves the lower half jagged and cut off, exposing the foundation beams and soggy grass. This is a dreamy underworld where characters from the 1860s and 1960s mingle with the 21st century. Kevin Newbury’s production uses some furniture and a few suggestions of cabins to conjure up a range of locations on the island. If it’s not entirely suggestive – with projections tending to be murky – it’s at least efficient and straightforward.

Just like the mechanics of the plot. The conflicts here are as firmly old-fashioned as in an Arthur Miller play – but just like in Miller’s work, they still make your stomach growl. Probably unlike the version of this libretto he would have written, however, the real tragedy does not strike in Spears and Smith’s narration. Everyone lives in the end.

And the secret revealed near that point isn’t quite a barnburner. But it does provide the real explanation for why Castor’s parents moved north—a telling reminder that migrations are not just abstract sociological phenomena, but happen family by family, for individual reasons.

There is no clear solution to the plot. In the last scene we see Castor, Celeste and Ruthie on the ferry back to the mainland. (Judah has decided to stay.) The implication seems to be that they will be back on the island for good in the foreseeable future, but we’re not sure. In a final aria – an oasis of Smith’s expressive, elegant poetry, after so much explanatory prose – Patience rejects the possibility of choosing between past or future. We are always among them.

For all the ambiguous peace this end offers, there is a bitter undercurrent: In America, especially in Black America, property is fundamentally weak. You can never run fast enough or far enough to escape the forces determined to dispossess you, or worse, “Sometimes I feel like something is trying to erase me,” Castor sings. When he finally returns to the island of Patience, it will be a homecoming, but also an acknowledgment of defeat – for a man and a country.

“What more do I need,” asks the opera in its silent final moments, “must I give away before I get off?”

Until July 30 at the Corbett Theater of the School for Creative and Performing Arts, Cincinnati; cincinnatioopera.org.