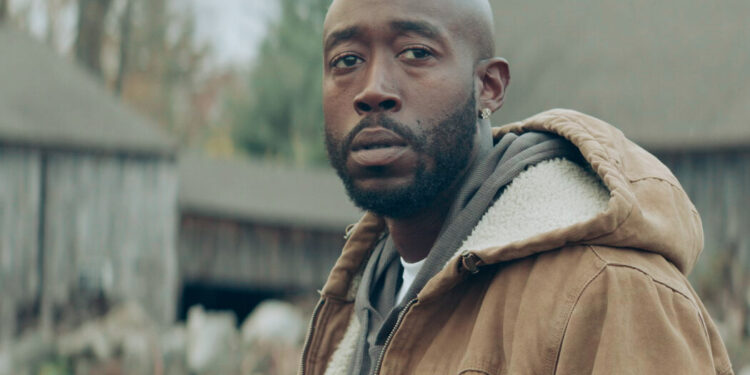 “Down With the King” is the first movie I’ve seen that confronts the Great Resignation, if not as a social phenomenon then as a mood. Money Merc, a hip-hop artist sensibly portrayed by real-life rapper Freddie Gibbs, is grappling with a career crisis specific to his personality and profession that is likely to resonate with anyone who has ever felt trapped, overwhelmed, or simply tired of work.

Merc has retired to a beautiful, remote spot in rural New England, ostensibly to work on material for a contractually required new album. He clearly enjoys the solitude, the company of at least a few locals and some of the chores and routines of rural life. He clears blind spots with a chainsaw, helps a neighbor slaughter a pig (and later, less successfully, an ox), and gazes pensively at the hills in their fall glory. But amid the pastoral tranquility and natural beauty, you feel the pull of its melancholy, the weight of its malaise.

Merc’s mother (Sharon Washington) named him Mercury, after the Roman god, and a kitschy plaster statue of the deity is part of the decor in Merc’s spacious Berkshires getaway. Mercury is an ever-busy mythical figure, associated with commerce, speed, and movement – anything his namesake wants to escape.

The director, Diego Ongaro, a French filmmaker living and working in New England, doesn’t overdramatize Merc’s situation or tie him to the machinery of a conspiracy. Merc is a black man in a very white environment, a fact that the film treats bluntly and also subtly. Taking its title from a Run-DMC comeback classic, “Down With the King” isn’t a fish-out-of-water comedy or a culture war melodrama. The story unfolds slowly and organically, following the rhythm of days spent trying to get things done and finding ways to avoid it. Merc is visited by his mother, several friends and a manager (David Krumholtz) who pushes him to stay on track. Money is at stake and a reputation to uphold.

More than that, Merc is not entirely alienated from a creative pursuit that has brought him both satisfaction and success. His verbal and musical skills are still there, as is the slow-burning charisma that keeps fans engaged on social media. He is expected – and expected of himself – to use his rest day as an opportunity to recharge, and then jump right back onto the brutal escalator of his career.

What is the alternative? Merc develops a romance with Michaele (Jamie Neumann), who works in a hardware store and hopes to resume her education after being beaten sideways by an addiction. He develops a friendship with a local farmer – played by Bob Tarasuk, a real-life Berkshires farmer who starred in Ongaro’s previous feature film, “Bob and the Trees” – that bridges differences in age and background. These relationships are sweet and surprising, but the film doesn’t overstate their transformative potential.

The “Down With the King” trait most strongly exhibited is patience, something that is scarce in modern cinema or, for that matter, the modern world. Rather than insisting on resolving conflicts or simplifying contradictions, it asks us to explore how we live by walking in someone else’s shoes for a while and feeling how they don’t fit anymore.