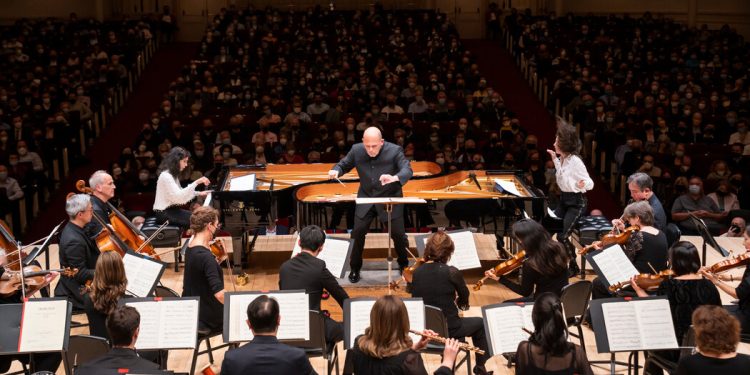 On Wednesday evening, Jaap van Zweden, musical director of the New York Philharmonic, designed an atmospheric program around the American premiere of Nico Muhly’s “In Certain Circles” in Carnegie Hall.

For the sisters Katia and Marielle Labèque, who performed the world premiere in Paris last year and went back to work on Wednesday, a concerto for two pianos and orchestra, “In Certain Circles”, was written in a program that also included erotically charged works by Debussy. and Wagner. “In Certain Circles” is an exciting new piece – focused, haunting, unafraid of sentiment – from a composer who has been in the spotlight, and the crosshairs of critics, since shortly after receiving his master’s degree from the Juilliard School in 2004. .

Muhly became the darling of classical music. He worked with Philip Glass and Björk. There were media profiles and numerous commissions, including the film score for ‘The Reader’ and a full-sized opera, all by the time he was 30 years old.

That opera, ‘Two Boys’, premiered at the English National Opera in 2011, and when it arrived at the Metropolitan Opera two years later, it sounded immature. It was certainly moody – a detective story whose discomfort stemmed from efficient musical motives and, of course, albeit simply spoken, recitative. Still, it felt like the soundtrack to a movie that wasn’t there. “Marnie,” which came to the Met in 2018, was a little less — a tense sophomore attempt at maturity.

“In Certain Circles” is something more. It’s moody too, but there’s a freedom born of confidence that makes it satisfying. Here Muhly develops musical ideas without being limited by elements such as plotting and vocal setting, as in the operas. It is not the case that he suddenly applies the rigorous architecture of, for example, a symphony by Beethoven. Instead, like Debussy, he seems motivated by the sounds of the instruments themselves. They tell him where to go.

The tone of “In Certain Circles” is consistent – wispy and vaguely ominous – but Muhly can tell a three-part story with it. The orchestration is web-like yet sparse, and somehow the two pianos are muted in it. It’s a nice sleight of hand: Muhly scores the instruments in roughly the same range and gives the orchestra strong, independent lines, creating the sense of an advancing threat.

In the first movement, “L’Enharmonique” – the name comes from Rameau – the orchestra takes a hostile attitude towards the pianos. The buyers beam at them. The bellboys catch them like circling crows. All the while, the two pianists run and run, playing long, heavily patterned pieces of 16th notes, unable to catch their breath. Then they repeat a series of ascending chords ending in unstable tone clusters – a stairway to nowhere.

At the end of the movement, when the orchestra finally cuts out, a musical fragment from Rameau emerges from the mist in a sweetly sad, delicate moment.

The Labèque sisters prefer rhythmic precision and fast, sharp action – a solid way to gain clarity in the double piano repertoire – and they use dynamics rather than color to define phrases. On Wednesday, Katia Labèque, who played the Piano I part, finished sentences with a wave of the hand and jumped from her stool to use the strength of her shoulders. Marielle, more collected, connected her notes fluently.

In the second movement, “Sarabande & Gigue”, the orchestra suddenly sympathizes with the soloists by supporting the piano parts. The flutes echo the melodic line, as an act of kindness, and the strings provide harmonic amplification.

The title, named after two baroque dances, is a bit of a feint: Muhly has both embraced and rejected the forms. Yes, he wrote a saraband in his traditional three-quarter time, but it is suspended, his feet hovering above the ground with a patient, disconsolate, undanceable tune, played by Katia with sensitivity. The gigue, in compound time, whirls chaotically.

In the final movement, ‘Details Emerge’, the pianos assert themselves with rumbles in the bass and contrasting flights in the upper regions of the keyboard. The orchestra reacts: the piccolos go wild and the percussionists beat with their cymbals and clap with their whips. The Rameau fragment returns in the piano, but as an imperfect memory. The orchestra, emboldened, decides to kill, but the piece ends abruptly, as if the lights went out before a winner could be determined in the concert’s battle.

The other pieces of the evening – Debussy’s “Prélude à l’Après-midi d’un Faune” and “La Mer”, and Wagner’s “Prelude and “Liebestod” from “Tristan und Isolde” – provided a wonderful setting for Muhly’s concert, even if their sensuality escaped from Sweden on stage.

Both preludes were delivered by the Philharmonic players with generally lingering strings and too strict tempos. These pieces are about as explicit as classical music gets without a warning about graphic content. But at Carnegie Hall, they didn’t give off much steam.