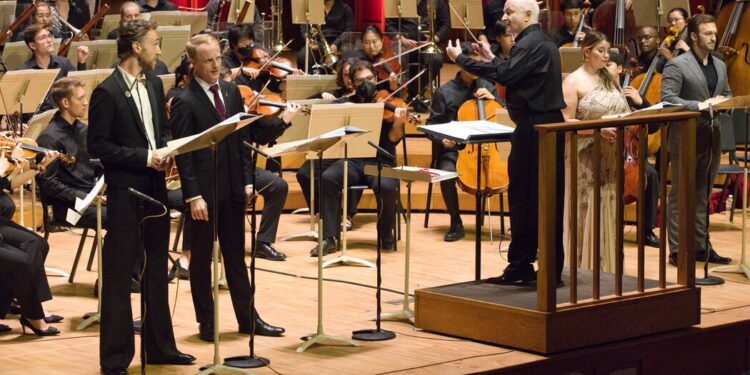 LENOX, Massachusetts – The problem with “Lessons in Love and Violence” has always been that it isn’t “written on the skin.”

‘Skin’, George Benjamin’s relentlessly ferocious second opera with librettist Martin Crimp, was hailed as a landmark when it premiered at the 2012 Aix-en-Provence festival. It’s only gotten bigger since then and it’s a routine choice. as one of the great operas of the century to date.

Benjamin and Crimp stuck to their template for the gruesome “Lessons,” the follow-up piece that was coolly received after its London debut in 2018 and which had its US premiere Monday night at Ozawa Hall here, with the composer bringing the young people of the Tanglewood Music Center Orchestra in razor-sharp support from a bold cast of current and past Tanglewood vocal fellows.

Like “Skin,” “Lessons” has a dense, historically contrived libretto, with an unfeeling plot that takes away any sentimentality you may have left about power or love. There is music that bubbles and calms – it’s every last, eerie tap of a cimbalom or brass bat, conceived and performed with impeccable clarity of gesture and precision of timbre.

But somehow this bejeweled, velvet-wrapped mace of a score never feels too deliberately methodical or sounds anything but fully alive. His imposing severity burns in the heat of the murderous moment.

Listen to it and you may wonder which of these two brutal operas should be Benjamin’s masterpiece. Because if “Skin” were to disappear, “Lessons” would be enough to anoint the composer all alone.

The operas are similar, but ‘Lessons’ is not just a reproduction of its predecessor. It lets go of the metahistorical bloom of the earlier work and focuses on the current story rather than creating a superstructure of characters to drag it into the present. Despite its medieval setting, the core of a prince who receives (dubious, shall we say) governance instruction from the machinations of his parents – the king and his wife, Isabel – and their scheming courtier lovers, Gaveston and Mortimer, has a Machiavellian agelessness there.

“Don’t bore me with the price of bread,” sings the king as Mortimer confronts him about the ruin his favor for Gaveston has unleashed on the body politic. ‘There is no connection between our music and your labour’, Isabel assures the impoverished entreaties who want an end to entertainment whose costs can pay their wages for a year. It was not without reason that the concert performance here, instinctively acted behind music stands, took on the moralistic story of an oratorio.

Revealing as the unstaged approach is, it’s unfortunate that “Lessons” premiered this way. How is it possible, one must ask, that the first American performance of such a great work should be entrusted to a group of summer school visitors for just one scarcely attended night—a Monday, no less—in the Berkshires?

The Lyric Opera of Chicago is one of seven co-commissioners of “Lessons,” but there’s still no sign of it staging Katie Mitchell’s original staging, which had to postpone it into 2020. Lacking a big house that “Skin”, New York’s Mostly Mozart Festival, at its bravest, gave that work its staged premiere in 2015, but that festival is no more.

It is to Tanglewood’s immense credit that it took the initiative by pushing its fellows to their limits at the close of the annual Festival of Contemporary Music and building on the long, close relationship the Boston Symphony Orchestra has had with Benjamin. , which led “Skin” in its rapidly ramped up US debut here in 2013 and followed it up with a song cycle, “Dream of the Song”, in 2016.

And you’d be glad, though joy isn’t this opera, to hear a performance as strong as Monday’s in a big house. Three of the lead roles were voiced by recent graduates of Tanglewood’s vocal program; a greater proof of its worth would be hard to imagine. Nathaniel Sullivan sang to the king—Edward II, as suggested by Christopher Marlowe and then reimagined by Crimp—with snorting command, the monarch’s weakness in the foreground. Daniel McGrew was eerily believable as the soldier-technocrat Mortimer’s heartfelt association of orderly progress with the necessity of killing, while Dominik gave Belavy Gaveston a wonderfully unhinged air.

No soprano takes on a role written for Barbara Hannigan without fear, but current Tanglewood colleague Elizabeth Polese pretended she had the haughty Isabel. She excelled, just as Edmond Rodriguez gave the boy terrifying dignity, who learns his lessons all too well, and gruesomely plans for Mortimer’s execution after the General installs him on the throne. Meredith Wohlgemuth, Claire McCahan and Jack Canfield have acquitted themselves well in minor roles.

But the orchestra was the star. Benjamin carried it out with his usual graceful efficiency. Apart from Alban Berg, few composers have been able to make abject brutality sound as exquisite, even tender, as Benjamin here, his use of silence as deliberate as his careful etching of textures around the voices.

There is a flawless flow to “Lessons”: several of the seven short scenes echo each other; interludes connect them, commenting and even extending the action; and the strange thread runs through, most prominently the braying trombones announcing the king and reappearing, muffled, when his son ascends the throne.

Yet it is Benjamin’s relentless ability to detect the most specific sounds that makes him such a potent playwright. A desperately longing solo horn, full of desire, plays as Gaveston recounts how the king likes to hold his hand over a flame; Clawing woodwinds surround a madman who fatally keeps the boy claiming he is the real king, based on a cat’s testimony.

Gaveston gets the most gruesome death of all, nothing like the gruesome tower of dissonance that accompanies the king’s assassination, but one we must imagine in absentia, as the impotent ruler details the death of his beloved from a letter reads while a percussionist taps a rhythm on the rim of a side drum.

You could hear in it the loneliness of Gaveston, or the anguish of a king facing the passage of time for his own sure murder. I heard cockroaches running around the dead. Anyway, what might be predictable in the hands of another composer makes Benjamin magical.

Lessons in love and violence

Performed on Monday at Ozawa Hall at Tanglewood in Lenox, Massachusetts.