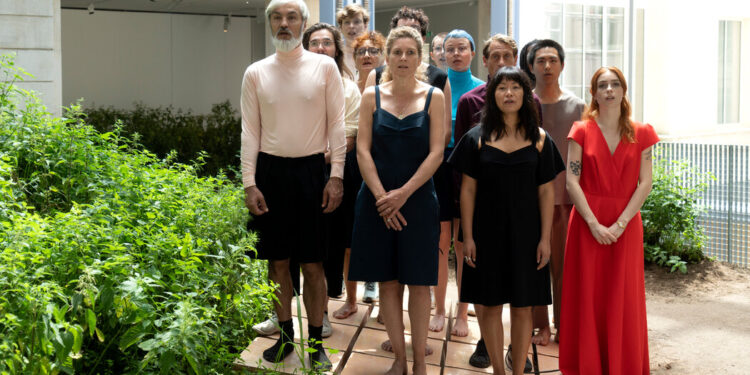 PARIS — The first time I sang was by ear. I imagine that is often the case. Toddlers join their favorite characters in Disney movies or echo their parents with muttered renditions of “Twinkle, Twinkle, Little Star.” When children start singing at school, they usually don’t learn from scores, but from lyrics that they memorize through repetition.

Then things change. The melodies are notated. Some people develop into disciplined singers and instrumentalists; others abandon musical study altogether. What about that last category, those for whom singing is simply something to enjoy, regardless of whether they can carry a tune in the car or at karaoke?

Those kinds of performances – those just for fun – are usually treated as unsuitable for the sacred spaces of musical expression. But ‘The Mutes’, Lina Lapelyte’s moving, melancholy and compelling installation in Lafayette Anticipations here, elevates that amateur naivety to high art.

Hosted by Elsa Coustou, “The Mutes” takes place in a light-hearted environment designed to subvert expectations at every turn, and unfolds in a loop of approximately 50 minutes for six hours a day, five days a week up to 24 hours. July. arrangement is reminiscent of ‘Sun & Sea’, Lapelyte’s widely traveled opera, created with her fellow Lithuanian artists Vaiva Grainyte and Rugile Barzdziukaite, which won the top prize at the Venice Biennale in 2019.

That work and the “Have a Good Day!” of the team. (2013), a kaleidoscopic look into the inner lives of cashiers, was comprehensive in scope. “Sun & Sea”, one of the most effective and indelible operas of this century, hides a sickening portrait of climate inaction in catchy, calming melodies sung from an artificial beach – a setting that could one day serve as a natural history exhibition of the Free time and laziness of the Anthropocene.

Here Lapelyte works alone, and in comparison “The Mutes” is much smaller. But the intimate scale is also more recognizable and heartbreaking. With a libretto composed from Sean Ashton’s novel “Living in a Land,” it expresses only the things its characters haven’t done. This is music of regret, of inability, music that can underline the feeling that “we live in time, not in place”.

The small ensemble of performers was auditioned with something like anti-musicality in mind; people who had been explicitly told that they were bad singers were the most ideal candidates. On Wednesday they performed the English text of the libretto with heavy French accents and imprecise intonation. Some were more outgoing than others. A man forgot halfway through a row.

“I’ve never been lucky,” the first artist, who walks through the installation, sings coolly. More never-have-I-ever followed: had a pen pal, learned a language, ate tapas, cried at the cinema, bought and sold at the right time, or whatever time. “It’s unlikely, isn’t it, I’ll ever get the keys to the city,” declares an ensemble member into a microphone. Another offers: “It’s unlikely, isn’t it, that I’ll ever be invited back to my old school to show what I’ve done with my life, what I’ve made of myself.”

All of these lines feature simple melodies, the kind you could easily learn by ear. More intricate are choral passages, especially antiphonal ones, challenging for untrained performers, but a compelling study in building harmony. These moments have the appearance of a community choir rehearsal—perhaps the most widespread form music-making takes, if one exists outside of what is traditionally considered mainstream performance.

The spirit of that deliberate contradiction – of a formal space devoted to seemingly informal performances, and of perceived disorder giving way to equilibrium – permeates the installation. Stinging nettles, medicinally beneficial but unloved as prickly weeds, are clustered indoors in a terrestrial landscape. Sloping stones form a perilous slope; so are sculptural shoes with uneven soles. But with complementary shapes, they together create a flat surface to stand up stably.

Visitors can explore the area at will – though they can’t try on the shoes – before performers enter, continuing to do so as the music unfolds. The singers move as if they are oblivious to the audience members, who can all follow them and are responsible for staying out of their way.

That opening sentence, about mumps, is accompanied by mentions of other illnesses: measles, chickenpox, syphilis. And under vocal writing is a minimalistic score typical of Lapelyte, ostinatos performed with electronics and constructed from a rising motif of two or three notes, or a single note on a fixed beat. But where that formula had an almost sleepy effect in ‘Sun & Sea’, it is complicated here by extra layers of improvisation by Lapelyte and Angharad Davies on violin, together with John Butcher on saxophone and Rhodri Davies on harp.

Their instrumental contributions, pre-recorded and played through speakers with meticulous spatial design, betray the emotions behind the straightforward vocals. Jazzy riffs and percussive string techniques add an element of restless excitement and worry. Realizing too late that you’ve never ‘canoeed’ or ‘planted a vegetable garden’ can be both sad and irritating.

But most of the time these sayings are sad, as life is inevitable, because of the people who convey them. Their sound unrefined and their performance strenuous, these singers were immersive in a way that professionals couldn’t be. Everything about them – their feelings, features, appearance – was familiar. They reminded me of so many friends and relatives, which is why they were more moving than, say, the protagonist of a Schubert song cycle or a Verdi tragedy.

I wonder if it was more difficult for them to sing together as adults than as children. When we are young, we pick up choral music uncritically, as if we were instinctive; later, a closer, more attentive way of listening is required to achieve harmony. It’s like when we learn everything else we forget exactly what we should always remember.