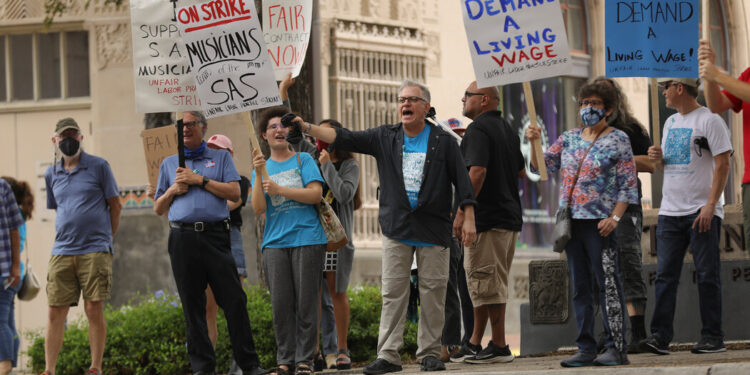 For nearly nine months, the musicians of the San Antonio Symphony were on strike, resisting sharp budget cuts proposed by management that they said would destroy the ensemble. As the dispute dragged on, much of the 2021-22 season was cancelled, players found part-time jobs and mediators tried to compromise to save the 83-year-old orchestra.

The deadlock ended on Thursday with the announcement that the symphony had decided to file for bankruptcy and dissolve. The symphony’s board, which had argued that maintaining a large orchestra had become too expensive, especially during the coronavirus pandemic, said it saw no way forward.

“With deep regret,” the board said in a statement, “the Board of Directors of the Symphony Society of San Antonio announces the dissolution of the San Antonio Symphony.”

The board said the musicians’ demands to keep jobs and wages “accept a budget that is millions of dollars more than what the symphony can afford”.

The decision will make San Antonio, with a population of 1.5 million, the largest U.S. city without a large orchestra.

†If you have a major American city that is unable to support an orchestra, it loses history and tremendous inspiration that has been brought to the community,” said Simon Woods, president and chief executive of the League of American Orchestras. “It’s just incredibly sad.”

Many of the orchestra’s players were taken aback by the announcement and said they were discouraged that no compromise could be reached. Since the strike began in late September, some have worked as substitutes in other orchestras, including Boston, New York, Dallas and Nashville.

“It’s sad and it’s completely unnecessary,” said Mary Ellen Goree, the orchestra’s former principal second violin, who was involved in the negotiations. “I really wish our leadership had removed itself without setting the organization on fire.”

The pandemic, which has forced many orchestras to cancel concerts for a season or more, has exacerbated those problems. Most orchestras were able to return to concert halls last season, dependent on government grants and an increase in donations, but others struggled to reopen.

In San Antonio, the orchestra’s administrators called the pandemic to justify the need for significant budget cuts, including reducing the full-time ensemble size by more than 40 percent, to 42 positions from 72, shortening the season and lowering of wages by almost a third .

The musicians opposed those moves, accusing administrators of mismanagement and greed. The dispute turned unusually bitter, with the orchestra cutting off health insurance for the striking players.

The board continued to defend the cuts, saying they were necessary to avoid a financial crisis. The musicians, in turn, accused managers of exploiting the pandemic to push through wage cuts and benefits.

Goree, who joined the orchestra in 1988, said the musicians would continue to look for ways to play under a new name in the community. In recent months, independent of the symphony, they have given concerts in a local church, raising money themselves. They hope to announce a fall season soon.

“San Antonio is a big city and can support a big orchestra,” she said.