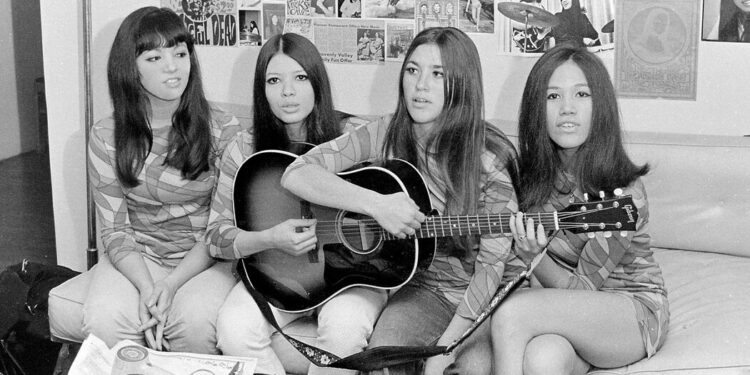 LEAVING JUNE MILLINGTON Fanny was in part due to a near “nervous breakdown” in late 1973, she said in a video interview. “I’m glad I left because I knew my life was at stake on an important level.” She sat in front of a crackling fire in her home on the campus of the Institute for the Musical Arts, a nonprofit recording and retreat facility she co-founded in Goshen, Massachusetts with her longtime partner Ann Hackler. various Buddhist artifacts – Millington is a practitioner of Tibetan Buddhism – and a framed photograph of Jimi Hendrix.

“The straw that broke the camel’s back,” Millington said, was the record label’s insistence that Fanny, whose members favored 1970s California chic, dress on stage in glamorous, more revealing outfits. (“My top was $45 in US coins, clenched into a loop, pinching my nipples,” said de Buhr.) Millington took it as a sign that Reprise had lost faith in the band. “I took it as an insult,” she said.

A new version of Fanny – featuring Adamian, Barclay, Darling and Quatro – signed with Casablanca Records and released one last album, “Rock and Roll Survivors” in 1974. That record featured the single “Butter Boy,” which Adamian says was inspired by — but not, as has been widely reported — her then-boyfriend, Bowie, and his gender-bending ways.

“‘He was hard as a rock, but I was ready to roll, what a shock to find that I had the situation under control,'” said Adamian, as he recited the opening lines of the song. “I mean, those kinds of lyrics were very ironic and meant to provoke.” “Butter Boy” became Fanny’s biggest hit, reaching number 29 on the Billboard Hot 100 in April 1975. But by this time, the band had split up for both artistic and personal reasons.

Fanny was technically never reunited. But in 2016, Millington, Adamian and Darling played together at a concert in Northampton, Massachusetts, a collaboration that led to the self-titled album “Fanny Walked the Earth.” That LP features appearances by the Buhr and Quatro, plus Valentine of the Go-Go’s and members of other all-female groups the Runaways and the Bangles.

A tentative plan to tour behind the Fanny Walked the Earth album was scuttled when, two months before the record’s release in March 2018, Adamian suffered a stroke that affected the right side of her body. Today she uses a wheelchair to get around. “I can’t play bass,” she said. “I keep looking at my two fingers and say, ‘If only one of you moved, that would be good.’ It’s absolutely frustrating.”