The Grammys pay tribute to Taylor Hawkins, Stephen Sondheim and other music stars. 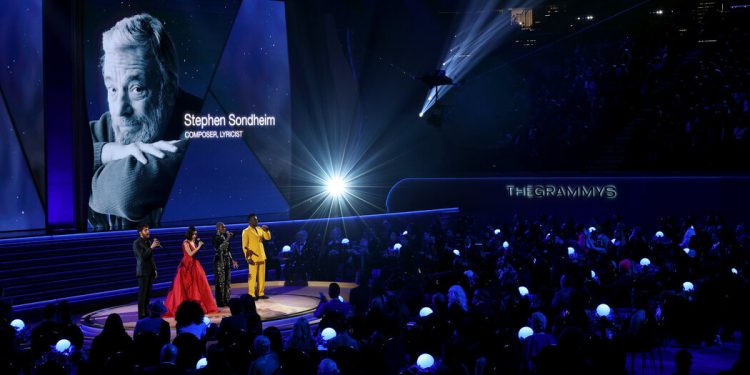 The Grammy Awards took a long time to honor Taylor Hawkins, the Foo Fighters drummer who died just over a week ago while touring with the band in Colombia.

The show featured a compilation of photos and video footage from Hawkins’ career as a charismatic drummer known for his wide smile. Hawkins, who joined Foo Fighters in the 1990s, died at age 50. The band was supposed to perform at the awards ceremony, but withdrew after Hawkins’ death.

Earlier in the evening, Billie Eilish paid tribute to Hawkins when she performed in a T-shirt with the drummer’s picture on it as she sang her song “Happier Than Ever.”

Following the Hawkins tribute, a quartet of musical theater performers honored other musical celebrities who have passed away in the past year, including Stephen Sondheim, the iconic Broadway composer and lyricist who passed away in November. Ben Platt, Cynthia Erivo, Leslie Odom Jr. and Rachel Zegler, who played Maria in the recent Steven Spielberg-directed film adaptation of West Side Story, sang a compilation of Sondheim songs, including “Send In the Clowns” and “Somewhere.” †

Among the honorees were Charlie Watts, the Rolling Stones drummer; Wanda Young, one of the lead singers of the Motown group the Marvelettes; DMX, the best-selling rapper; Meat Loaf, the lead singer of “Bat Out of Hell”; and Biz Markie, the rapper and producer.