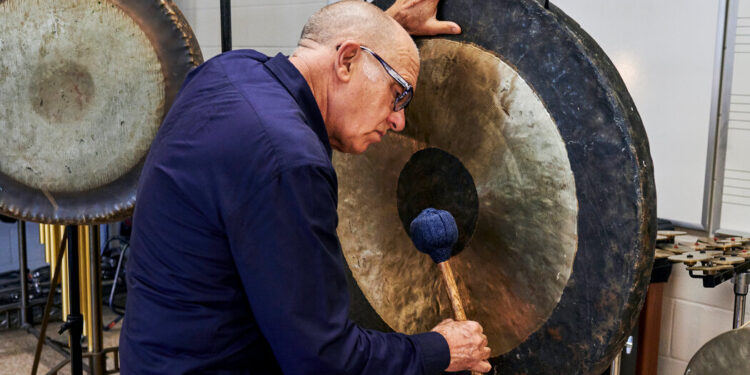 SAN DIEGO — Since its first performance, in 1976, Iannis Xenakis’ ‘Psappha’ has formed the core of the solo percussion repertoire.

Not that there really was any competition: when it premiered, a repertoire for solo percussion barely existed. But “Psappha” shook the burgeoning field with its tension between flexible instrumentation and rigorous beat, between stark rhythms and kaleidoscopic colors. The 14-minute piece, in which the player is in charge of a sprawling sequence, came across as a strikingly modern abstraction of an ancient ritual, balancing between sober and ecstatic.

Steven Schick managed to strike the precarious balance between those two qualities when he recently recorded the pounding last minute in a studio on the campus of the University of California, where he has taught since 1991.

“Even my 20-year-old me couldn’t have done that,” a smiling Schick, 68, said over the control room speakers when he was done. “That was pretty good.”

Known for the ease and clarity with which he handles the polyphonic intensity of the piece, Schick had already recorded it for a Xenakis collection released in 2006. an oeuvre that he has commanded for almost half a century. The opening movement, “A Hard Rain”, which collects some of the fundamental pieces he learned when he started out as a musician, was released Friday.

At first glance, the series may seem like a nostalgic farewell to these works. After all, as his sweat and heavy breathing when he finished the recording session made clear, percussion, more than most instrumental music making, is a game for youngsters.

But after a foray into conducting — his tenure as leader of the La Jolla Symphony and Chorus, which began as a lark and lasted 15 years, ending in June — Schick is once again focusing on solo performances.

“My percussion game was saved by conducting,” he said in an interview on the patio of his home in La Jolla. “The repertoire is not that big. I’ve played ‘Psappha’ a thousand times. So I was really on the brink of burnout.”

It was an innovation cemented during the pandemic.

“I didn’t miss conducting,” he said. “And I didn’t even miss the personal teaching. I certainly did not miss concerts. But it itched to practice. It felt like I was 19 or 20: learning these pieces not because I had a concert, but simply because I wanted to.”

So “Weather Systems” is part textbook, part scrapbook, part locked diary, part communion with its younger self, part accumulation of new works. Looking to his past and sketching his future, it is meant to be the magnum opus of a figure the composer Michael Gordon has called “the philosopher king of percussion music.”

Born in Iowa, Schick grew up first on his family’s farm and then in a small town nearby. (“A Hard Rain” refers to the rainfall that every farmer obsess over, as well as the deluge of the pandemic.)

“The elementary school band teacher sent home an instrument list so the parents could decide what their kids would play,” he said. “And at the top were the ones I wanted: violin and horn sounded a bit exotic. But at the very bottom were drums, with an asterisk that the parents didn’t have to buy the drums, just the sticks. And my mother was frugal; I was the oldest of five.”

So he became a drummer, playing in a marching band and some rock and roll groups. What classical music he knew belonged to his mother, a talented amateur pianist. She took him to the New York Philharmonic on tour – Seiji Ozawa conducted Debussy’s “La Mer”.

“And I thought, Whoa,” Schick recalled. “I just knew that wasn’t the marching band.”

Planning to become a doctor (his father’s ambition before farming), Schick soon transferred to the University of Iowa, where an influx of money from the Rockefeller Foundation had established an unlikely hotbed of contemporary music. When asked by the pianist James Avery, a faculty member, to work with him on Stockhausen’s “Kontakte” – a long, raucous electro-acoustic classic created in the late 1950s – Schick was pushed into the heart of experimental music.

“It was the moment when there was no turning back,” he said.

With a talent and work ethic that enabled him to memorize vast amounts of complex music, Schick quickly stood out for his magnetic, theatrical performances, remarkable for the movement, almost choreographic in its fluid elegance, as well as for the sound.

“You have to imagine the eighties,” said Gordon, one of the composers who founded the collective Bang on a Can. “People took to the stage to play contemporary music with the music pasted onto huge pieces of cardboard. It was: ‘I do very serious work; this is very difficult; this music is very complicated.’ And Steve, from the start, what really shocked everyone is that he decided he’s not playing anything unless he’s playing it by heart. And once he got rid of having the music, he’s an incredibly dynamic artist.”

Bang on a Can brought him on as a founding member of the All-Stars chamber ensemble, a new challenge for a solo specialist. He settled in San Diego, where he turned his class of graduate students into the traveling ensemble Red Fish Blue Fish, remaining the rare performer equally interested in the complex tangle of Brian Ferneyhough and Charles Wuorinen; the candor of Morton Feldman and John Cage; and the post-minimalist rock inflections of Gordon and his cohort.

All these styles come together in ‘The Percussionist’s Art’, his 2006 book that is a sort of memoir in music: poetic and thoughtful, but without limiting itself to detailed measure-by-measure advice for his fellow artists.

“He wrote about these pieces in the same way I would hear pianists talk about the classical pieces in their repertoire,” said Ian Rosenbaum, member of the quartet Sandbox Percussion. “He wasn’t talking about them in terms of sticks and the technical stuff; he spoke of them in terms of feelings and emotions. It was an interpretation dimension that I had never really thought about.”

Schick developed a reputation as a player whose technique could handle any obstacle. “Any reasonable composer would think: This is Steve Schick; he can play anything; I’m just going to write a virtuoso showpiece, and everything impossible I can think of,” said John Luther Adams, a close friend and collaborator who wrote the suite “The Mathematics of Resonant Bodies” for Schick in 2002.

“I did the exact opposite,” Adams continued. “I gave him this piece that requires a kind of Butoh virtuosity, this almost frozen slow-motion virtuosity.”

Schick, of course, took it to heart and made it his own, as he does with almost any musical challenge. Not having enough hands for an old piece from Bang on a Can, he figured he could attach sleigh bells to his ankles and dance the piece.

He’s filmed audienceless performances in the Arctic tundra and misty Canadian mountains, and four years ago led the San Diego Symphony in a rousing interpretation of Adams’ Inuksuit on the US-Mexico border, with musicians on both sides. He stars in Tyshawn Sorey’s epic, icy “Monochromatic Light (Afterlife)” at the Park Avenue Armory this fall, after attending its premiere at Houston’s Rothko Chapel in February.

“Weather Systems” is released on the Islandia Music Records label, founded by cellist Maya Beiser, another close friend and co-founder of the Bang on a Can All-Stars. “I knew I wanted to do a big project with Steve,” she said. “It worked out perfectly that he was at this point in his career when he wanted to refocus on his solo work.”

A collaboration with audio engineer Andrew Munsey, “A Hard Rain” is a meditative two hours of music, with the dark resonance of a cave – and, in Kurt Schwitters’ “Ursonate”, a stream of dada gibberish. The following is an episode of radio play-style pieces for speaking percussionist by George Lewis, Vivian Fung, Pamela Z, and Roger Reynolds.

And, further in the future, an album with ‘Psappha’. Schick’s new recording recreates the situation of his on-campus rehearsal studio during the pandemic, when limited space meant hanging gongs surrounded his setup in front of the Xenakis. The result is a barely audible but palpable shimmer around the beats that transitions into the pauses – a subtle enhancement of the ritualistic nature of the piece and an indelible record of Schick’s life over the years.

“Steve really is the god of a certain kind of percussion playing,” said Sarah Hennies, a musician and composer who studied with him in San Diego. “The music of ‘Psappha’ is ecstatic and compelling and powerful. But the way Steve plays it doesn’t make it feel like he’s showing off, and that’s what a lot of people want to do.”

And Schick has only become more frugal in his gestures, the distribution of his energy.

“All these percussion solos from that era were written for young, acrobatic people,” he said of the “Hard Rain” collection. “So the question is, what does an aging body, but a more experienced body, have to offer? And it turns out I’m a better player than I was. I don’t waste time.”