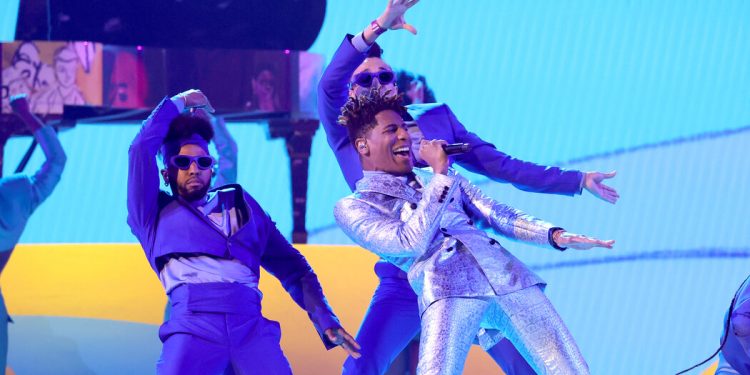 Some of the music on “We Are” takes its acoustic-funk aesthetic from the 60s, but other parts recall the 90s, that pre-9/11 moment when Keb Mo’ became a Grammy favorite, and Starbucks curated albums that infiltrated genres and parental CD players everywhere. “Cry,” a single from Batiste’s album that won Best American Roots Performance and Best American Roots Song, is reminiscent of that time.

He also floats in the now. The first half of “Boy Hood,” his collaboration with Trombone Shorty and PJ Morton, adapts the aesthetic of the trap for a meditation on the simple joys of childhood in New Orleans.

Ultimately, Batiste’s music is about feeling good as a collective act. Often that means playing things that sound familiar and keeping it lighthearted. On “Freedom,” a horn-powered funk prop that won the Grammy for Best Music Video and was nominated for Record of the Year, Batiste sounds like he’s climbed into the cast of an old protest song and made a party song instead.

But there’s something else you need to understand before you can get Batiste: he comes from a city where time and space remain somewhat collapsed, and where a black instrumental tradition that died 50 years ago in most other parts of the country actually continues. That tradition is based on togetherness and dance, and as a result it has perhaps the least complicated relationship to musical pleasure of any lifestyle in this country – even in spite of the increasingly desperate conditions the people live there.

The atmosphere of Batiste may seem saccharine to someone from outside New Orleans, especially if you haven’t strolled down Frenchmen Street with a plastic cup in hand, or made your way to a marching band performance at Celebration Hall on a weeknight, or infected by the Neville Brothers’ Caribbean funk one spring afternoon at JazzFest. Listen to the records Batiste’s New Orleanian colleagues are putting out today – Trombone Shorty, PJ Morton and Tank and the Bangas, for a few, following in the footsteps of the Nevilles, Dr. John and Professor Longhair – and you’ll discover a similar kind of happy-to-make-you-feel-good funk. Challenge your ironic, digital brain to love it again. See if you can handle it.

Batiste’s 11 nominations on Sunday — the most of any artist — hit categories including R&B, jazz, roots music, film score (for his work on the Pixar film “Soul”) and classical music. That tells you that supporting a young jazz musician these days means standing behind something wider than any genre, even if he’s a relative traditionalist, proud to be in Satchmo’s shadow.