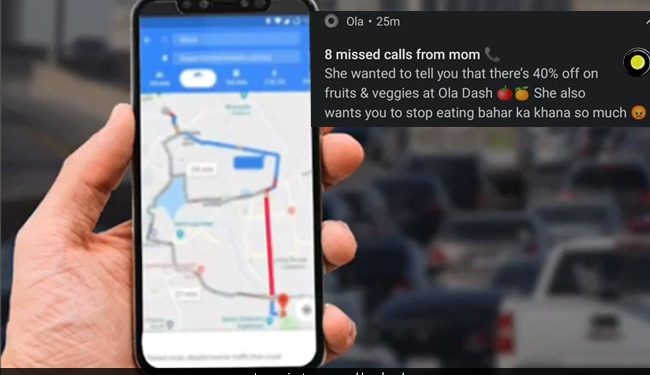 Nothing could have prepared Ola customers for the alarming message that appeared on their mobile phones yesterday. The taxi aggregator company decided – in a move that was widely criticized on social media – to share a notification that read “8 missed calls from mom” with several of their customers. Needless to say, the clickbait doesn’t go down well. Where a single missed call from your mother is enough to create fear, Ola’s report caused people to panic until they realized it was nothing more than a marketing ploy promoting a 40 percent discount on certain services.

“‘8 missed calls from mommy’ followed by a 40% promo! This is a terrible clickbait from Ola,” wrote one Twitter user, sharing a screenshot of the report.

‘8 missed calls from mom’, followed by a 40% discount!
This is a terrible clickbait from Ola.
Photo via @kartik679 on LinkedIn. pic.twitter.com/QBzIF86510

Many others on the microblogging platform agreed that Ola’s marketing stunt did nothing but cause fear.

“Why does Ola traumatize me like that?” one user asked.

8 missed calls from your mother????

“Ola, are you trying to give me a heart attack?” another wrote.

@Olacabs are you trying to give me a heart attack???!!

The reactions were similar on LinkedIn, where Kartik Bhatt, Chief Operating Officer of Sharaf Retail, labeled the marketing stunt as distasteful. “Imagine the impact of such an ad on people like me who have recently lost their mother/or people who live far away from their sick mother. The ad is a clickbait tactic – but it hits a bad chord and leaves a very bitter aftertaste,” Bhatt wrote.

A screenshot of Ola’s terrifying report also made it to Reddit, where it has racked up more than 24,000 “upvotes.” In the comments section, many called for Ola to show more sensitivity in future ad campaigns.

“Imagine sending this notification to someone whose mother recently passed away or went missing. Horrible company,” wrote one Reddit user. “This is very disturbing,” said another.

Ola’s marketing mistake comes a day after e-commerce company Flipkart went into hot water for their Women’s Day campaign. On International Women’s Day, Flipkart sent out a message promoting kitchen appliances, which many on social media denounced as sexist.