Dog jumped out of window, alert owner catches it just in time 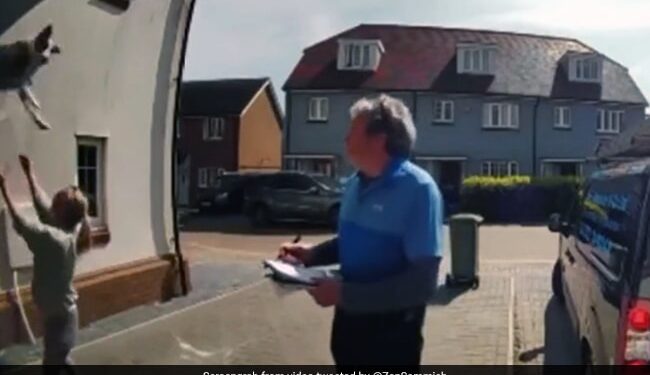 A woman in the UK with lightning reflexes and situational awareness managed to save her dog who jumped out of a window. A now viral video shows Rachel Green receiving a package in front of her house before looking up and screaming to “come back”. She then goes to the building and manages to catch her dog that falls freely from the window of her apartment. The doorbell footage shows how her quick thinking managed to save the dog.

Sound on. Woman saves dog after he jumped out of window The guest reaction (or lack thereof) is just as interesting and so very British (“damn hell”). pic.twitter.com/CyZvncp4gX

Speak with LadBible, owner Rachel Green spoke about how the pandemic along with the lockdown had helped her pet feel more clingy than usual. She said: “”She’s never done that before and she’s six, so it was a bit of a shock. She has always been an independent dog but I think she has become affectionate since the pandemic/WFH and always wants to be by my side. didn’t know how far she would go to do that… The windows were closed but she managed to push one wide open, I only noticed she was there because the sun reflection on the window/wall was moving and caught my attention when it opened.”

The video went viral on social media and was posted on the “Made Me Smile” forum of the social media site Reddit. The post has generated a lot of engagement with over 52,000 upvotes and 960 comments.

Many studies have shown that during the pandemic, pets have become more attached to their owners as they have become more accustomed to being at home. The Royal Society for the Prevention of Cruelty to Animals has advised owners to reduce interaction with their pets when they are in the house to help them become more independent.