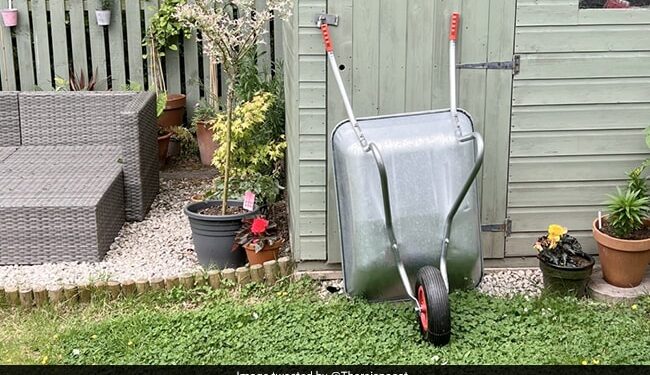 The cat can be seen hiding between the wheelbarrow and the shed.

A photo of a backyard has internet users scratching their heads because somewhere in the image a cat is perfectly camouflaged.

The photo was shared by the popular Twitter account “There is no cat in this image.” It shows a backyard, with a manicured lawn, shed, wheelbarrow and sitting area, with a fence behind it. It features a cat named Ricky, who lives in Bradford, England.

Have a look at the message below:

The photo has confused many people. The post has amassed over 6,600 likes and thousands of comments.

One user simply wrote, “I give up,” while another said, “I can see something black and white that could be a cat.” A third user said, “I’ve completely forgotten what a cat looks like right now. I’m losing it.” “I thought he was looking out the window lol,” the fourth added.

Speak with news week, the cat owner, Lee Oman, revealed that the cat was hiding between the wheelbarrow and the shed. “I took it as a Spot Ricky photo for my partner and daughter, but didn’t know anything about the Twitter account at the time, my partner told me about it later. I took it from just inside our kitchen extension,” said Mr Oman.

Some Internet users also managed to spot the cat. One user commented: “Is Ricky really the black thing behind the wheelbarrow? I give up, looked all over this photo..” Another shared a close-up screengrab of the original image, simply writing: “fluffy tail”. A third said, “There may not be a cat, but I believe I see a tail.”

According to the outlet, Mr. Oman revealed that his cat isn’t much of a hide-and-seeker. “I’m not sure if he did that on purpose at the time,” he added. He also said he adopted the five-year-old cat just over a year ago.