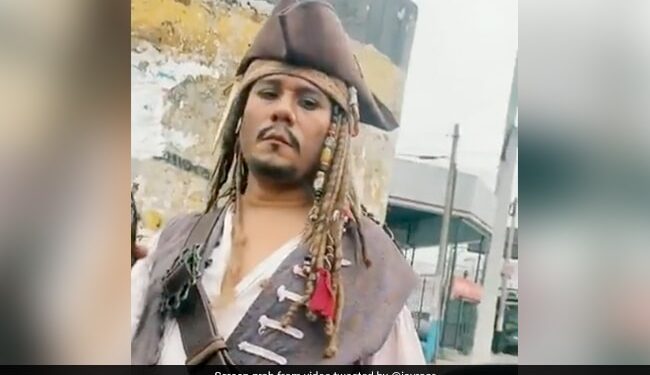 The man pretended to be Jack Sparrow to look for money.

The video of a beggar donning Captain Jack Sparrow’s outfit is gaining popularity on the Internet. It shows the man perfectly imitating the mannerisms of Johnny Depp (who played the character in Pirates of the Caribbean franchise) while asking for money and even carrying a toy gun to complete the look.

The video surfaced two months ago when Depp was fighting a legal battle against his ex-wife Amber Heard, but is once again going viral on Twitter and other social media platforms.

This was the most creative begging I’ve ever seen 😭🤣🤣☠️🏴‍☠️
pic.twitter.com/hUHFYjGimC

It shows the beggar seeing a man’s car, who is recording the clip, at a traffic light. He takes out his toy gun and starts walking towards the car. After reaching the car window, he takes out his hat to collect money from the man.

After collecting the money, he gives a Jack Sparrow-esque smile and walks away. The location where the video was shot is unknown.

Users have complimented the beggar’s performance. “That’s Johnny Debt,” said one Twitter user. “I would have given my brother $100 just for the effort,” another tweeted.

The video shared by user @javrorar has been viewed nearly eight million times and over 364,000 users have liked it.

Mr Depp recently won a defamation case against Ms Heard for her 2018 article in Washington Post. She was asked to pay $10.35 million in damages to the actor.

Her team is now trying to overturn the verdict, claiming it was not supported by evidence.