Roller coaster in US crashes, riders hang upside down for almost 45 minutes 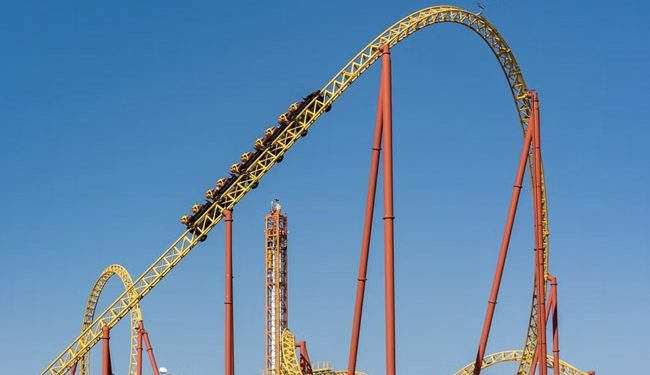 Riders expected a fun day at the Carowinds amusement park in North Carolina, USA, but events took an unexpected turn and their roller coaster ride turned scary. The coaster suddenly stopped and the glitch lasted for nearly 45 minutes, leaving the riders upside down. Fortunately there were no injuries.

According to Fox 59, riders got stuck on Friday on the Flying Cobra, the roller coaster that sends people through a 360-degree loop at speeds of up to 80 km/h. The 125-meter high looping coaster flips riders a total of six times. But the tension turned to chills when the roller coaster stopped moving altogether for so long.

Speaking to the media, Brandon Allen said it was his first experience in an amusement park on a roller coaster, but unfortunately the ride stalled. “I have personally seen my tears fall from the sky. It was terrifying,” Mr Allen said, describing the ordeal.

“We’re going to the top where they support you, and he was counting down. He says, ‘We’re sorry, we’re having some technical issues’ and we thought he was joking because of the element of surprise or something,” he said. Fox 59†

He added that the minutes of being stuck felt like hours. The rider also revealed that they have been told the ride will be repaired sometime between 35 and 45 minutes. “That may not be that important, but it’s a big deal if you just look all the way down to the ground. There were parents trying to talk to their kids and yelling, ‘It’ll be okay’!” said Mr. Allen.

He also noted that riders got stuck on the Electro Spin ride last month. Mr Allen said it seems like this happens so often now. “It’s almost like it keeps happening, and that’s what’s so scary about it,” he added.

Meanwhile, after the incident, Carowinds amusement park issued a statement regarding the incident, Fox 59 reported. The park’s maintenance team responded quickly and at no point were the guests in danger. The statement added that all guests were safely returned to the station and unloaded within 30 minutes. They also received two fast pass vouchers each.