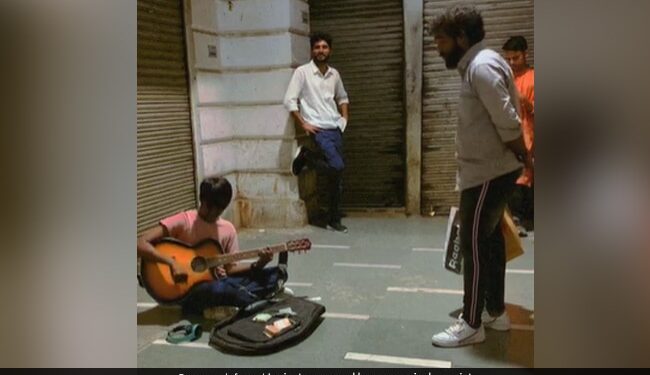 The video shared on Instagram has more than 17 million views.

Needless to say, Indians are extremely talented in all areas. Many Indians excel at singing and dancing without even having a formal education and several videos that are going viral on the internet are proof of that. Recently, a video of a beautifully impromptu performance by two men has surfaced on Instagram, giving the internet a musical treat.

The video captured at Connaught Place in Delhi shows a street musician playing the popular song beautifully Mann Bharrya on his guitar, sitting on the floor. A bystander, who seems impressed, decides to join him for an impromptu jam session. As the standing man begins to sing the lyrics to the song, he asks the guitarist to sing along. Soon, the beautiful melody that transitions into a duet attracts onlookers and passers-by who leave some cash in the boy’s guitar case.

The video was shared on Instagram by a user named Ranveer Thakur. One of the musicians was identified as Shivam and the man who joined them was Luv Singh, according to the video’s caption. Incidentally, they are both artists, according to their Instagram bios.

The clip has racked up more than 17 million views and 2.4 million likes after being shared online. Social media users were mesmerized by the soulful performance and filled the comment section with praise and heart emojis. “Pure soul with talent,” wrote one user. “Every broken soul felt that,” said a second. A third person added: “When you sing with all your heart and people listen to you with all their heart, it creates a beautiful moment”

A rendition of the song Mann Bharryaoriginally sung by B Praak, was part of the 2021 Bollywood movie Shershaah which became a bull’s eye.

Recently, industrialist Harsh Goenka shared a similar video of a man who “Kesariya‘ on a street in London. A huge crowd could be seen standing close to the man as he performed the rendition of the popular song.