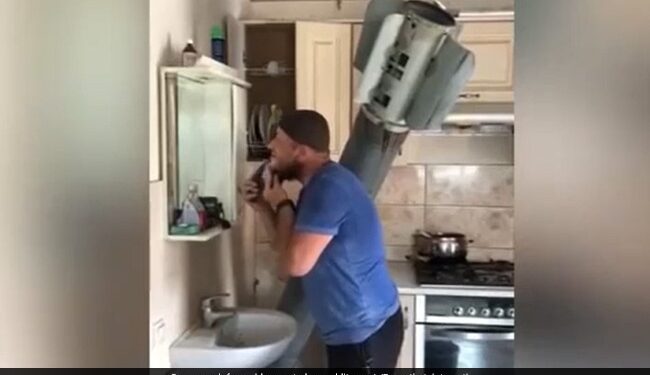 Since it was shared, the video has taken the internet by storm.

Incredible footage of a Ukrainian man shaving his beard with a rocket in his kitchen has gone viral on the internet. The clip, shared on Reddit, shows the man having a perfectly normal day, even though a piece of military equipment hangs from his ceiling.

In the video, the man shows off his ceiling where the undetonated rocket entered his house. The caption of the post read: “A piece of a Russian orc missile flew into the home of a Ukrainian.”

The unidentified man was casually seen shaving in the sink with the large rocket – taller than him – hanging down from the ceiling to the right.

Since it was shared, the video has taken the internet by storm. In the comment section, several users said they couldn’t believe how calm and casual the man was, given that a piece of a rocket is in his house.

One user wrote: “Bruh, I’m not going into my room when there’s a spider shaving this guy with a rocket.” Another said: “A piece? Isn’t that the whole rocket?!” A third user added: “Frankly, that would be a pretty awesome lamp once it calms down. Provided it doesn’t have a live warhead attached yet.”

The person who shared the clip explained that this is the top stage of a rocket, it doesn’t explode, it just falls from the sky everywhere.

Meanwhile, on Sunday, several explosions shook the Shevchenkivskiy power station in Kiev, causing extensive damage and setting fire to a residential building. According to reports, emergency services said that as a result of the Russian shelling, a fire broke out in a nine-storey residential building that was partially damaged by the attack.

Also read | G7 summit begins in the shadow of war in Ukraine, risk of stagflation

Kiev mayor Vitali Klitschko said residents are being rescued and evacuated from two buildings. Ukrainian President Volodymyr Zelensky, on the other hand, said Ukraine would regain all the cities it lost to Russia, admitting that the war was becoming emotionally difficult to handle.